I noticed a pattern during the 12 years I spent in my last ward. Cute newly wed girls and guys would get temple married and start their lives together. Then as the kids came along and the callings piled up they would gain weight, often times worse for the females. At least it seemed so from my definitely male perspective. I began to wonder if church made you fat. Over and over again, both with and without babies being born, the most valiant members, you know, the ones doing all the work in ward council and on committees. They would put on weight year after year, my wife and I included.

These observations came at a point in my life when I was beginning to question the validity of the teachings of the church. A very good friend of mine, a personal trainer, nutritionist and fellow mormon pointed out how some of the Word of Wisdom teachings actually contradicted the latest health science findings. Particularly regarding the benefits of things like moderate coffee and wine drinking. The WoW certainly promotes eating lots and lots of grains (known these days as carbs) and discourages protein (at least in the form of meat). Something completely contrary to most modern diet plans.

As my wife and I left behind our religion and approached nutrition from a non WoW perspective we both started losing weight, in fact we each lost over 60 lbs. Who would have thunk it? A daily cup of coffee turns out to be far more healthy than extracting that caffeine out of it and mixing it up in 64 ounces of diet coke. Cut out those carbs, eat more protein, add in a little exercise and you are well on your way to looking and feeling great! All pretty much by doing the opposite of what the word of wisdom says. 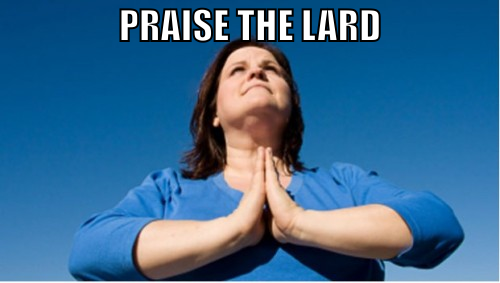 So my observations and my personal experience support the idea that church does indeed make you fat. However being an armchair theorist, I had to try and figure out why. Here are my thoughts.

Being a stalwart member of the church is a demanding undertaking. The church requires a lot of sacrifice. Even doctrinally it expects you to put the church above all else in your life including your own person. When you do so the community sees that and encourages it. The selfless member is lauded and appreciated for their sacrifice. The relief society president that goes to all the homes is gossiped about (in a good way) for her efforts. What happens is this. Slowly, week by week, year by year the church steals away your self esteem. The underlying message is that each and every member is nothing without the church. So as you work harder and sacrifice more, you lose more of your own person and replace it with the person of the church. Hell, on the female side of it they call it the Mormon Mom Syndrome. Personally I think it hits women harder for two reasons, one it is a very patriarchal society, and two I suspect some gene on that the extra X chromosome leads to a tendency to compare yourself more to others rather evaluating yourself on your own merits.

So with all this work and effort, even ignoring your own health for the church, its no wonder that a few pounds start packing on. That is the beginning of the self confidence spiral. One day you look in the mirror and you don’t like what you see, next week at church though people treat you great and are very nice, complementing you on your church efforts. Over time your self esteem becomes based entirely on your faithfulness in the religion. You see once religion has stolen your self-esteem, it ransoms it back to you for renewed devotion to the cause. It’s a no win spiral down into an unacknowledged depression driven by cognitive dissonance and an effort to be a perfect saint.

This is certainly a topic that is likely to incite many who read it. Especially if you are a true believer and can’t imagine even remotely the possibility the damage I am talking about. I believe there is merit to the discussion and at some level even the most devout Mormon mom’s realize the pressure that is felt to be the perfect member.

I once posted this bit of information on Facebook:

Cindy Mann, who lives in Logan, said after 15 years of taking antidepressants and not feeling better, she finally quit in July. Today she encourages others to do likewise, but she’s pessimistic. ‘It’s like Happy Valley here,’ she said, describing the Salt Lake Valley. ‘It’s a scary place sometimes. People don’t talk about their problems. Everything is always rosy. That’s how we got ourselves into this mess‑‑we’re good at ignoring things.’ 1

That post lit off a firestorm of comments, several females declaring loudly that sure there were high expectations from the church and at times they felt depressed, but vehemently denying that there was any possibility it could be connected to their unhappiness.

“The lady doth protest too much, methinks” is what came to mind as I waded through the comments. It made me sad to watch them defend the very institution that I thought was responsible for the depression we were discussing. The very same depression that they all acknowledged feeling from time to time. Ironically church claims to have the answer to this issue, Jesus himself said come to me and your burdens would be light. Why is it religion has been linked to chronic depression? Either the chronically depressed seek out solace in religion, or religion is causing it. I am of the opinion it is more likely the latter. Mormons aren’t alone in this either, sure they are a perfectionist religion that drives relentlessly after personal worthiness. But I realized that church making you fat by stealing your entire world view happens in all faiths when I saw this video.

Look at her and imagine where she gets her self-esteem from? Do you think it might be her religion? I do.

Now if it were all true, if Mormons are the only religion to get it right on this planet and if this sacrifice demanded now really did give you a forever family, I’d be first to line up and do what was needed for such a great reward. The fact is I did it for 44 years believing exactly that to be the case. However, if it is just a good club to belong to and a place to get your social fix… might I suggest Crossfit instead? The monthly dues are far cheaper and from personal experience I can see it has given my wife true self-esteem. Not some stepford wives appearance of it, but an actual physical change that helps her view herself in a positive light.

Don’t let an institution that is more worried about the bottom line, than its doctrine; that spends more money on malls than its own members. Don’t let them steal your self-esteem only to sell it back to you. Check the facts behind the promises, look up the claims they are making and see if you should really invest. Because one day they will market their dream to your daughter. To a young woman it is a beautiful enthralling idea of a forever marriage in a beautiful castle that is the promise for the servitude that is required. If that dream isn’t really theirs to make good on, you just might want to warn your little girl that church makes you fat.

Addendum,
While looking for an appropriate picture for this post, I stumbled onto this article, and this one too. Turns out I wasn’t the first to notice this correlation and some real research (as opposed to my pontificating) has been done on the topic. Also of note as I was discussing this topic with my wife, whenever we have to deal with subbing and shunning from family that still believe over the fact we are now considered apostates. Cravings to eat a whole box of Oreos kick in hard. Even having left church behind over a year ago, it is still trying to make us fat, and its not just the jello salad with funeral potatoes…