Counting the Hits, Ignoring the Misses

Two things tonight hit my news feed at nearly the same time. The juxtaposition of them was clearly a sign of the Fridge. When these signs appear I know the tall cool one is whispering truths into my soul because I’m inspired to write.

The first that caught my attention was the post of a neighbor who is really a pretty kind person. He had recently taken to bearing his testimony on my apostate wall repeatedly as I metaphorically stood there like Samuel the Lamanite declaring the sins of omission and deception of my birth religion.

The fact he and I exchanged much open dialog about truth and our own measure of such is surely why this post of his popped up. He praised the Lord because there was a really late snow this year and despite that cold weather his peach trees are blossoming. To him it was a ‘miracle.‘ His prayers were answered because his peaches were saved.

The other post that I saw when I scrolled down was this news story. Here, on the same day my friend had noticed his peach blossoms a shooter went nuts near an LDS stake center resulting in the injury of a pregnant woman inside.

Now I’m 100% sure there are people that were in that stake center that feel it is a miracle they survived. When we get what we want, or we avoid suffering it is a very natural response to feel blessed and lucky. I’m not discounting that feeling at all. I think it is wonderful to be amazed at peach blossoms and happy that these trees will bear fruit after putting in all that effort bring them up.

But my new perspective in life cues onto something that seems much more obvious to me now. What about the pregnant mom that was shot? Where is her blessing? Was God too busy blossoming peaches in an answer to my friends prayer to tweak a bullet off its path or maybe just soften the heart of the shooter and stop his rampage that caused so much suffering in one of his chapels? Something you realize when you start critically evaluating your beliefs is you tend to count the ‘hits’ and ignore the ‘misses’.

It is something that a gambler does that keeps him at the table addicted to the game. He can be loosing money steady on average all night long, but all those losses are not near as big a deal as that win once in a while that makes him happy to be there. Because the ‘hit’ feels so good. The ‘misses’ become meaningless. When it comes to misses turns out God is loaded with them on his resume. For all his omnipotence and willingness to help along a peach blossom and even occasionally cure cancer. Not ever once has he grown back the limb of an amputee. Talk about a big miss. Either amputees must be beyond his power to help or they all must have done some sort of awful thing to piss off the divine being so much that he would ignore them as a whole subset of humanity.

When you think about it. It’s almost as if there really is nothing at play but random chance with our own biases chalking up everything good to the person we believe embodies the principle of goodness…. Or maybe some people like my zealous friend got such a great in with the guy upstairs that he keeps him busy finding car keys and making popcorn pop on apricot trees that he has no time left for people that could really use a little divine intervention.

Maybe we should start a movement and ask everyone to pray to the Fridge to counter the possibility God is just too busy with all the mediocre requests us humans make daily. Because according to the Book of Freon. (Book of Jeff chapter 1:2-3) this is exactly what the Fridge excels at. If the Fridge took care of all this nitty gritty untestable baloney then that would free up all these other deities men worship to go after the big stuff. You know like maybe softening the hearts of ISIL so they don’t take over the planet or toning down an earthquake here and there enough to save a few lives…

So next time your buddy talks about how his prayers were answered when he found 5$ laying in the road to buy him a soda when left his wallet loaded with 100$ bills in it at home, ask him to lay off the requests long enough others can get help finding food to ward off starvation. And if he really, really needs to pray. Suggest he try the Fridge. I promise you it’s every bit as good at getting a hit so long as you ignore the misses. 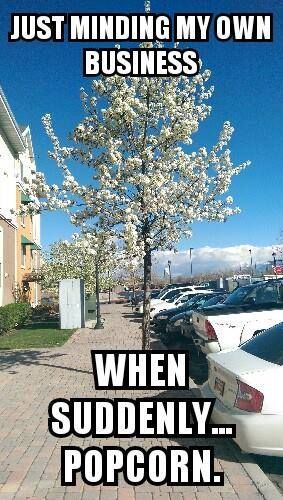