Good in spite of the church not because of it.

A friend of mine recently went through a faith crisis much like my own, she mentioned something that happened to me as well as many others I have talked to. She said she was going to miss the good things she experienced in the church.

Well I was pondering this while staring into the fridge late last night when inspiration struck and these words fell out over a late night snack.

The point of this website for me (Other than a place just to type stuff and share it with the world) is exactly what she was talking about. Thus the tag line making myth work for humanity not against it.

JC, the one in the quote above, (not the other guy with the same initials that also said some profound stuff) was an expert in the field of mythology and how it helps the human psyche. If you haven’t heard of him and wonder if he knows his stuff or not you might have heard of a little moving that he helped put together the mythology for. It was called Star Wars. 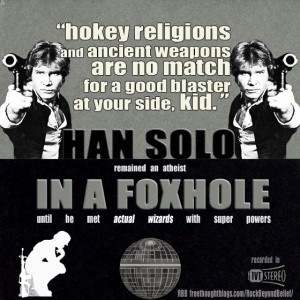 [subscribe2]
If you did the google search you have found that followers of the Jedi religion far exceed the Fridgidarians  (or Freons as people sometimes jokingly call us) I think in our last census there were six of us,,, hmmm maybe a little missionary work is in order, but I digress.

Point is mythology works for us humans, things don’t have to be literally true to give us hope and help us focus on opportunities. For my friend I would tell her that you don’t have to lose anything. Why? Because like Dumbo’s feather and the ability to fly, it was inside you all along.

Churches and religions are made up of people, simple as that. People trying to make the world a better place typically. All religions start out as a rebellion against the status quo and end up as an orthodoxy. The rebellion is to make things better, thats why they get followers, but the orthodoxy they become, what causes that? Taking the myth as fact. Once that myth becomes fact, then humans get all too caught up in defending their truth against some other guys truth and we end up with religions battling it out with each other because clearly God is on both their sides…

So here is my point, if it can be just facetious enough, just silly enough to not ever be taken as fact can it still be a mythology of ‘good stuff’ that doesn’t take a turn for the orthodoxy? I think the answer is yes. Why? because over and over again I see some really good people in religions doing really good things while completely ignoring the crappy racist, me vs them doctrine that is at the core of a mythology that is taken as fact. People are often good in spite of their church, not because of it.

For thus saith the fridge all the good things therein of that you partake when you open the door and light spilleth forth. They were put there by another like you given in hopes of future nourishment . For nothing comes out to bless one that wasn’t put in by another!