By B. Very Chill

For the second time in my entire life, I didn’t watch General Conference.  Of course, there’s always that well-meaning person who contacts me to let me know that they were watching Conference and heard a great talk that made them think of me.  Last April it was Elder Holland’s address to the doubters in the kingdom entitled, “Lord, I Believe.”  This time, a friend of mine thought of me when she heard President Uchtdorf’s talk (does it even have a title yet?) inviting those who have left the fold to come back.

Let me just say, first of all, that it was nice that he acknowledged that the reasons why so many people like me are leaving the church are not just the old stereotypes of being lazy or wanting to sin. It was wonderful that he encouraged members to treat us with respect and honor our right to worship according to the dictates of our consciences. But it was hard listening to his entreaties to come back, because no one knows more than we, the “lost sheep,” know how dearly we wished we could. No one who hasn’t gone through the loss of their testimony knows how wrenching and painful it is to make the decision to walk away. Giving up our social network, risking the abandonment of family members and friends, losing our entire foundational understanding of who we are and why we are here is very difficult.

But the fact is, we can’t just come back, no matter how much we want to. The church is not a social club or a support group or even a family.

The church is an ultimatum.

Either you believe that Joseph really saw God and Jesus Christ or you don’t. Either the Book of Mormon is a record written by ancient Americans who descended from Hebrews, or it is a piece of historical fiction. Either this is the only true church on the earth, with authority given by God to act in his name, or it is just one of many belief systems that lead people (for the most part) to do good things and live good lives. There is no room in this church for people who believe the latter. It doesn’t work. So out of our desire to be true to ourselves and live with integrity, we are forced to walk away. It is a huge test not only of our integrity, but of the relationships that we have built over our lifetimes. It is sad to discover that very few relationships, even in our own families, were really strong enough to withstand this. For that reason, I’m very glad that Elder Uchtdorf encouraged respect and understanding.

However, it seems to me that most of the members of the church did not make that respect their major takeaway. Instead, my Facebook newsfeed was flooded with memes of his catchy phrase, “Doubt your doubts before you doubt your faith.” 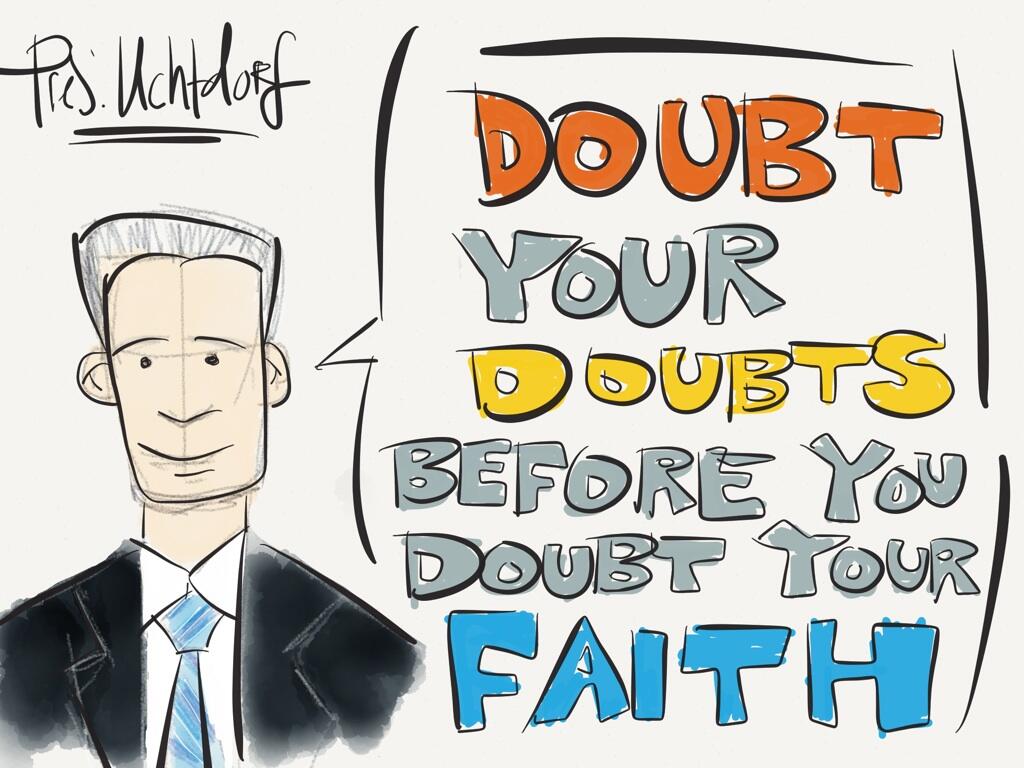 Believe me. I tried that over and over again. My brain did that automatically. I really did not want to entertain for a moment that this church could possibly not be what it professed to be. It took a personal crisis to make me even willing to look at information that could possibly damage my testimony. And if you talk to other recent Ex-Mormons, you will find almost across the board the same story. We doubted our doubts over and over again in a desperate and instinctual effort to maintain homeostasis.

But then, there was something else within us that believed that if the church is true, it could withstand scrutiny. And if, God forbid, it isn’t true, that we ought to be willing to accept that new, albeit painful truth. What I found is that doubt or reason is not a human weakness, as I was always taught. Rather, doubt is one of the great assets of the human mind. Here are a few catchy quotes that refute Elder Uchtdorf’s catchy quote outright.

“The whole problem with the world is that fools and fanatics are always so certain of themselves, but wiser men so full of doubts.” ― Bertrand Russell

In examining the facts that have disillusioned so many, I found that they weren’t just minor mistakes or errors of judgement as President Uchtdorf implied. My faith could have easily withstood learning about Joseph’s polygamy or the Kirtland banking scandal or even Brigham Young’s racism.  Those could have been honest mistakes or errors of imperfect men. But what I learned were facts that touch every major doctrine and claim of truth. They were not just examples of imperfect men who made mistakes. They were evidences that would stand up in any courtroom that what we believe happened in that grove of trees did not happen. That Joseph really couldn’t translate anything. That the Book of Mormon is a nice story, but fundamentally fiction and mostly plagiarized from contemporary sources.

As much as I hated it, as much as it made me sick to my stomach, I had to admit that all my wonderful feelings and confirmations of the Spirit had an alternate explanation. My emotions were confirming to me what I believed was true. And that is why my Catholic friends “know” that Mother Mary helps them find things. And why my Baptist friends “know” that Jesus has entered their heart and that they are saved. I have no doubt that Muslims rely on those same feelings to confirm to them that Mohammed did indeed see an angel of light and that the Koran is the word of God. I have continued to feel those feelings, even since I have left the church.

So at the end of the day, I felt like Elder Uchtdorf’s catchy phrase sounded really nice, but that it was fundamentally flawed and that I wouldn’t apply it anywhere else in my life or to anyone else. I mean, didn’t I spend a year and a half as a missionary in the Netherlands trying to convince other people to doubt THEIR faith and consider that ours might be true? Why was I not willing to be skeptical of my own faith? What a double standard!

Ya know, I’m sad that so many people watched Elder Uchtdorf’s talk and grieved over me. I hate to be the cause of pain to anyone and I wish that everyone could look at me and feel okay. Because I feel okay. I guess I can’t own their pain. It’s pain that is caused by a belief system that I can’t change for them.

But if I could talk to them right now, I would say, “I’m sorry that you bear that burden. I know you love me, and you hope I will return someday.  It is what all believers hope for those that leave. But I’ve discovered a new and wonderful world of doubt.  And I doubt I could ever go back to a world where I thought I knew so much.”

Robert Weston, a Unitarian Universalist minister said, “Cherish your doubts, for doubt is the attendant of truth. Doubt is the key to the door of knowledge; it is the servant of discovery.  A belief which may not be questioned binds us to error, for there is incompleteness and imperfection in every belief. Doubt is the touchstone of truth; it is an acid which eats away the false. Let no one fear for the truth, that doubt may consume it; for doubt is a testing of belief. The truth stands boldly and unafraid; it is not shaken by the testing; For truth, if it be truth, arises from each testing stronger, more secure. Those that would silence doubt are filled with fear; their houses are built on shifting sands. But those who fear not doubt, and know its use; are founded on rock. They shall walk in the light of growing knowledge; the work of their hands shall endure. Therefore let us not fear doubt, but let us rejoice in its help: It is to the wise as a staff to the blind; doubt is the attendant of truth.”

Doubt isn’t so bad.  In fact, I’ve found that allowing myself to doubt has changed me for the better.  It has opened me up to new people, new ideas, and new ways of living my life.  I’m less likely to judge others and to cling to damaging dogmas.  In fact, my new mantra nowadays is, “I could be wrong.”  Is it possible that someday I will discover new information that will change my mind on this?  Certainly! I could be wrong.  But I doubt it.