Losing a Loved One

Some days it just hits me, usually by surprise. I think I won’t ever see him again… he was like my own son. The only pain I could imagine feeling worse is if it were my own son. Then I think of my best friend and his loss. Then I replay over in my head this scene from Lord of the Rings.

No parent should have to bury their child.

It rings in my ears. This scenario happens every few days, sometimes several times a day, even now, months later. I can only image how much harder it must be for my closest friend, the parent of this wonderful kid.

If I believed in God, I think I’d shake my fist at the sky in rage. Why allow such pain and suffering? I’m not buying the ‘its for your own’ good baloney. When its someone else you don’t know that died its easy to think that. But not when it’s close to home. Not when presumably God is so willing to jump in and help someone else. (if their FB post gets enough likes) It just makes no sense in my mind.

Of course neither does this loss. It is senseless, a stupid mistake that didn’t need to happen. I can’t find shelter in the ‘all part of Gods plan’ motif either. Thing is, I want to. When I’m honest with myself, I want to believe in another chance at this life. An opportunity to right wrongs, a do-over to avoid the mistakes of the past. A chance to see his bright smiling face again. This is nothing like losing my grandma, she was 96 years old. She got to spend 86 more years here and experience what life had to offer. I was close to her too. I loved her dearly. That progression seemed natural. This one was all sorts of wrong.

Does the Fridge help me? Well, yes and no. The Fridge is a self avowed God of the little things and the loss of a loved one is a big thing. Close to, if not at the top of the list, so in that way not helpful at all.

On the other hand I write. I write things and I put them on the Fridge door. There they remind me. They remind me of the places I need to be and more importantly the things I want to be. One thing on my Fridge that I that will be posted till the day it’s my turn to go was etched there by a little boy that always looked on the bright side. It says: 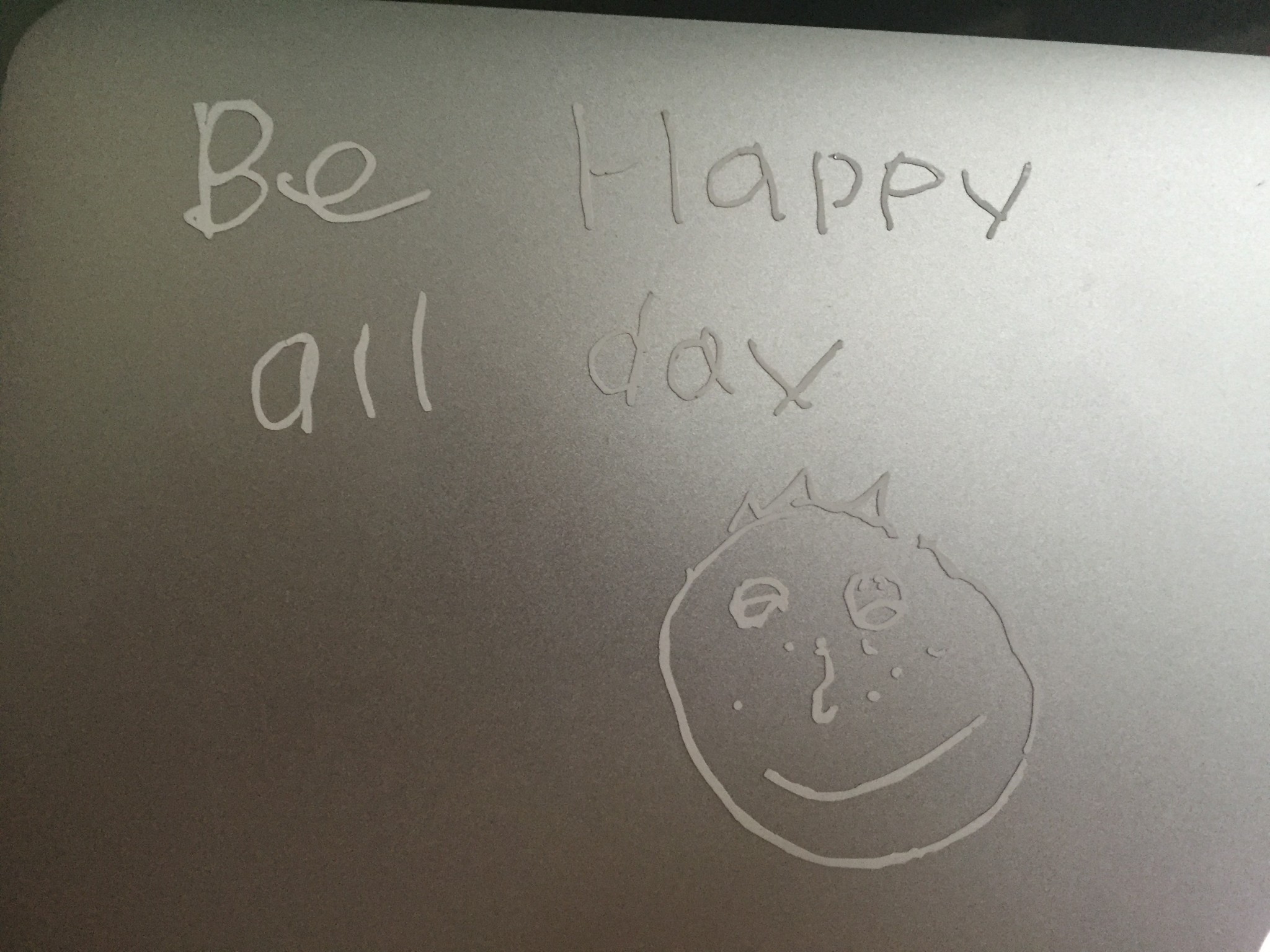 A note he had left on his family’s Fridge. Coincidence? In this case I choose to think not. Because it reminds me of things. It displays accomplishments, wedding announcements and words of advice. It is very much a symbol of things that I need to know.

One thing I think about when I look the Fridge is how cool human beings are to invent something like that. Being able to preserve food turned out to be pretty handy in the big scheme of it all. Hell, we are even freezing people in an effort to cheat death right now. More chill coincidence? You be the judge. What does this mean? It means I still have hope. As an electrical engineer with a decent grasp of physics I realize our lives leave an imprint on this universe. Each thought that has cruised through your connectome was accompanied by an electromagnetic wave that left your noodle at the speed of light wafting out into the universe.

There is a record of you, in energy that you expended, yesterday and the day before, and the day before that traveling out into the cosmos just like a cell phone signal. If we could collect that, and imprint it on an exact clone of a new you, wouldn’t that be a resurrection?

Now this is not an easy problem to solve. Sorting out a single person from the billions of brain wavefronts alone is mind boggling. Let alone building the systems to pick up those signals and turn it all back into the person we know today. It’s such a crazy improbable task that I expect us to figure out how to live forever and record living humans long before we pull this off. But if we can get along, If we keep from wiping ourselves out we have a long time to work on this problem. Another 5 billion years or so…

5 BILLION years???!!!! We invented the Fridge in about 50 years… computers in a century… the internet… space travel… medicine… we are already manipulating our own DNA! The list of what has happened since we took matters into our own hands and instead of waiting for something ‘out there’ to save us is impressive and long and can easily fit in the last 1000 years. Think about that. What kind of problems will we be able solve in 5 million of those millennia? Sure it’s a problem but isn’t that what we humans are particularly good at? Solving problems?

I can’t imagine a better homecoming than one more hug from a bright eyed kid ready to take on the world. So you see my lack of faith in the divine hasn’t caused me to lose hope. If I’m right and a couple billion years down the road we have figured out how to resurrect someone. To them it will be but an instant. To me it will be a blink of an eye. 1The Fridge gives me hope. Not because it is magical, but because it is a symbol of how once breakthrough human achievement can become mundane and so commonplace it is in everyone’s kitchen. Is it really that big a stretch for me to think the same thing could happen to the way we will cheat death in a few billion years?

So when the pain hits and I hurt because I lost a loved one this is how I deal with it. I find hope in what humanity can achieve, and that gives me a reason to be happy all day.