Loyalty and Revolution, This is Gospel

We are born to be loyal. It is in our DNA, its even in the DNA of our closest primate relatives. It is why you can always find a Ford lover to argue with a Chevy advocate. There will be an Apple fan ready to take on all those PC users. Marriage is fundamentally a declaration and promise of loyalty to another human being. Likewise joining a religion often comes with an entrance ceremony that at a minimum implies loyalty if not outright covenanting it.

Also in our DNA is a natural hatred to those that are disloyal. We don’t just feel a little anger toward the flip flopper, often we literally hate them. When a person that for a long time agreed with you suddenly seems to take a different approach that you don’t think is right. It makes you feel anger. It is an interesting question, why would we feel anger toward a person that just simply changed their mind, especially when we are also at the same time declaring every person has a right to freely think what they will?

Well I think it comes back to loyalty. Loyalty is something that helped our own tribe survive the invasion of other tribes. In days long past you outright declared an oath of fealty to your kinsman. Why would this be a good thing? Because of reciprocity. It makes you sleep better at night when you trust your kinsman on watch has your back. Loyalty is tied in deeply with trust. Trust is one of those things that makes us moral beings. It is part of what bonds us socially. Along with a sense of fairness and altruism, trust and loyalty are key to keeping a group together. Ironically or not, these are also not human only traits, here is a Ted talk on it if you like to study that type of thing. Dogs are some of most loyal species on the planet. They are bred for it. Likewise these morals of loyalty and trust are part of our DNA, we are born with a moral center.

Personally I was born and raised a Chevy guy. That was the truck to have. I owned several over my lifetime. Then one day I test drove a big white Ford. Here some 10 years later I’m still driving that truck. Having a good experience with it had affected my loyalty to the brand I was raised with. Why is that? Is it because it was that much better of a product? Probably not, the differences aren’t all that big. More likely my loyalty ties to the fact I invested in it. It was the most expensive truck I had ever bought. You see loyalty goes hand in hand with investment. This is why all those frequent flyer programs and credit card points systems work. Think about it, if a credit company in the long run didn’t make more money with all their cash back incentives, would they keep doing it? There is a psychology of loyalty and investment at work. You keep doing what you have invested in. Why? Because you are vested in it. Kind of circular isn’t it.1 Because loyalty goes with investment, we can become loyal to any cause we sacrifice for.

Our loyalty bonds us to a group or brand. It helps us overlook little deficiencies, like the door locks not working on my truck anymore. I see those as not such a big deal, but the Chevy loyalist would readily point it out as a flaw typical of all Fords. Our loyalty to our own group makes us advocates of that society. Is it good to be loyal? Is there ever a time when you should be disloyal? I think the answer to both is yes. It is loyalty that binds us together, when we bond as a group and are loyal to that group’s ideology we effect change in the world. Because significant change doesn’t happen until a single voice becomes many and that takes loyalty.

On the other hand there are times we should upset the status quo. We wouldn’t advocate a wife being loyal to a husband that is abusing her would we? What if she was sure he had good intentions and felt like was a good provider other than the bruises n’ all. She might even feel like she should remain loyal to him and be angry at you for telling her not to. When we have misplaced our loyalty, it is ok to change. When the whole system is corrupt being disloyal is the only way to fix it. Do you think Jesus was being loyal to his jewish roots when he challenged the religious powers of his time? He was a rebel, a traitor to the religious leaders, called them hypocrites and tried to point out a better more moral way. What happened to him for his rebellious actions? They kicked him out of the group. In fact kicked him clean out of humanity by killing him. Why? Because he was disloyal to his tribe.

This week some news broke in the tribe I was once loyal too. Some of the activists have just been told they have to tow the party line or leave, voluntarily or forcibly so. Their sin? Trying to make the group more accepting of people that think differently than the guys in charge. Not believing the guys at the top speak for God on these subjects was what they did wrong. The irony is the same organization that gave the them the boot declares its leaders are human and make mistakes. A reasonable person has to ask. Couldn’t the stance on Gays and Women be just as mistaken as the whole blacks denied priesthood and all that polygamy stuff? It’s not the same you say? Then why was this guy kicked out for not towing the line with blacks and the priesthood ban?

The June three’s reason for getting the boot is simple, they were disloyal to the tribe. In a comment thread I was reading earlier today, several people mentioned that they had pretty much gotten over their own emotions that followed their discovery of deception and subsequent loss of faith, but then this story broke and it caused them anger toward the religion that they hadn’t felt in a long time. This has to do with loyalty as well. Even after you leave a group you don’t ever expunge its effects entirely, your roots are there, they are your kin. Even though you don’t believe anymore, deep down you hope the religion you once were part of will shed the negative aspects that it has enshrined into orthodoxy. You want the best for for your kin that you left behind, because you still feel loyal to them. Think about that, you are no longer loyal to the organization, but you are loyal to the people in the organization. This kind of loyalty fosters revolution. 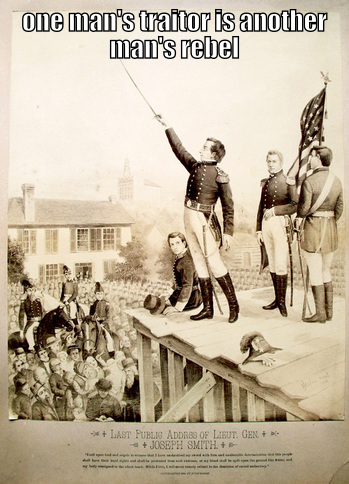 Getting kicked out of the group hurts and it makes you feel bad, no longer being part of the tribe is heartbreaking as Miss Chill so beautifully pointed out. But it isn’t quite as bad if there are others that see things the way you do, it helps you get over the loss when you find a different group to be loyal to. When the church booted the September six for not towing the party line it made a few ripples amongst the average believers, but it was 1993, social media didn’t exist. This time it is different, this time you can find a new tribe quickly, you can reach across the planet and find a soul in Sweden that feels the same way you do about being lied to.

One thing that I suspect is still not quite getting through at the highest levels the church is the time for hiding the past is past. Being exclusive is not going to help the cause of bringing people to the gospel because ultimately the gospel is inside each one of us. Ultimately we have to square what we feel is fair and right inside with the declarations of the leaders of the group we belong to. By telling people like this to fall in line or else, you are forcing the choice. There are many that were remaining loyal, seeing the good things in the religion and still looking past the the ‘broken door’ locks of the brand they love. This action makes it a requirement to look at what they believe they have to decide if the religion they hold dear is inline with their own gospel of fairness, their own opinion of equity and right and wrong. This action says, it isn’t ok for you to be different, just like the guy that was cast out for thinking black people should have the priesthood you must do as we say to be part of the club. It says you must think like the leaders tell you to. Even if the leaders might be wrong. If you don’t, your only choice is to rebel.

A religion that excises the people that try to change it for the better shoots itself in the foot. By making examples of people they show that dissidence is not allowed, they create martyrs to the cause of justice and fairness that is innate in our humanity. Expulsion from society is one of that greatest punishments we enact on any human being. It is a significant threat. Here is the rub though, the threat of expulsion only works if you have no where to turn to. This act will hurt the church membership more than any other excommunication they have done till now for one simple reason. The people that don’t like it don’t have to fear being alone. Thanks to the hyper-social world we live in today there is a place to go, there is a gospel for the fallen ones.