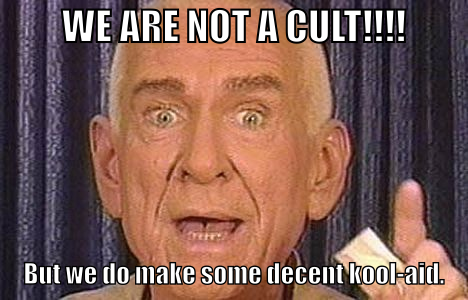 There are many that say the LDS church is a cult, personally I don’t think so, well not exactly anyways. It’s not nearly to the level of Jonestown or Heavens Gate. There are no group suicides and they at least pay lip service to independent thought. ‘You can have your own ideas, just don’t rally support to change ours’. Is what you hear when you want to know if it is ok to question the leaders or not. When I compare it to the BITE model of cultish-ness there are quite a few maybes on the list from my perspective, so personally I can’t quite call it a full on cult. Even with the cheesy jello and the funeral potatoes showing up everywhere instead of kook-aid. 🙂 So for this essay lets call it a mild cult.

It is filled with mildness too if you think about it. The general conference sessions are mildly hypnotic, not out rightly so for sure but take a look at the patterns and cadence of the talks. They could have come right out of a neural linguistic programming handbook. I honestly don’t think most of them realize the way they are talking is a form of hypnotic suggestion, they just copy what the other leaders have done since the beginning of the religion. Is it any surprise that it is so easy into a mild nap during these sessions?

Testimonies are mildly and meekly shared, enhancing the mild little voice inside telling you it is all true. It is rare that a leader gets strongly outspoken, that is why cases like Holland getting animated during a sermon get so widely talked about.

Members are warned to steer clear of confrontation, they are reminded of the need to be meek and mild-like. Both male and female leaders seem to develop a singsong voice and an almost sticky sweet way of mildly communicating and suppressing their passion. Kind of reminds me of this:

Now one of the first principles in the gospel of the Fridge is a good pun is a good thing. So far mild cult in the title is punny for two reasons, it is a mild cult that teaches members to be mild! But I’d like to reveal a third meaning in this essay. 1 While there are those in the mild trance that are willing seek out the light and truth on their own there are many more that do not. You personally may wish to expose your friend or loved one to a little more open thinking. Well I suggest it takes a mild approach. Outright denunciation of their faith will likely never work. It will instead trigger a backfire effect and reinforce the belief you are trying to get them to see a little more critically.

Instead of strong declarations against the religion, ask mildly though provoking questions. Engage in open dialog, discover the emotional connections that have created that persons bond to the church. Make sure your friends and family understand some of the emotional reasons you couldn’t pretend to believe anymore. Your approach to questioning the mild programming (that now probably frustrates you immensely when you see it regurgitated) needs to be mild if you want to effect positive change in your relationships going forward.

A direct approach due to the realities of cognitive dissonance is simply not that effective. A mild approach to sharing your reasons for leaving the church that can generate actual questions by the believers themselves when they regurgitate the pat answer is a better way. Putting a person in a situation where they have to question their own rationalization is a far more productive to help others to think critically and question the things they have been taught to think. If it is a mildly difficult question, it is easier for the person to face and less likely to simply be shelved and ignored.

On the plus side this mild approach will lessen the angst between you and friends or family that still believe something you see as false. To take it means accepting the fact they may never ever see it your way. Such is life. Accept that and then you will have the opportunity to encourage independent thought and develop an atmosphere of open dialog and questions that can lead to understanding. It is key that you respect others feelings for their belief no matter how much you might think they have been fooled. Everyone has a right to how they feel.

Then one day, one of those that you have talked to might give you a call, or send you a message and say “You know I have been thinking about that point you made the other day…I think I see where you are coming from now.” And in that day your joy will be great as you have exposed another soul to the freedom of thought that comes from belief in the Fridge. It will be worth the wait, I promise.