More Problems with Polygamy and Children of Homosexuals

“Our Heavenly Father is more liberal in His views, and boundless in His mercies and blessings, than we are ready to believe or receive…”1

Of course these days gay peoples kids don’t seem to get the same liberal considerations that the prophet Joe was talking about when he penned the above words in a letter to Nancy Rigdon in his effort to convince her to be his plural wife after she refused. I have seen a part of this same letter quoted by believers in the wake of this policy to restrict children from joining the church.

“That which is wrong under one circumstance, may be, and often is, right under another.”

Continuing to Nancy in an effort to explain why polygamy is a good thing and not at all as bad as she thinks it is. Joseph wrote:

“…even things which might be considered abominable to all who understand the order of heaven only in part, but which in reality were right because God gave and sanctioned by special revelation.”

This to me is where it gets interesting in regards to the latest policy this church Joseph founded has taken towards gay marriage.2   The main theme in the wake of this exposure of internal bigotry towards people that are attracted the same sex is that the limits placed on children are for the good of the kids. To protect them and all. Even in the latest clarification they have doubled down on this excuse. The reason I call it an excuse is because the only other children that are treated that way are the kids of polygamists. Specifically those apostate polygamists that are awful because they are following the teachings of the original prophet of the church.3 It’s like they are saying:

‘We need to protect those kids from conflicts about religious beliefs, not from atheists or Jehovah’s witnesses, or ever even scientologists. That isn’t enough of a conflict, but polygamy and gay marriage that is pretty bad and requires kids to condemn the lifestyles of their own parents before they are good enough for the LDS faith.’

Don’t take my word for it, look at the policy yourself. 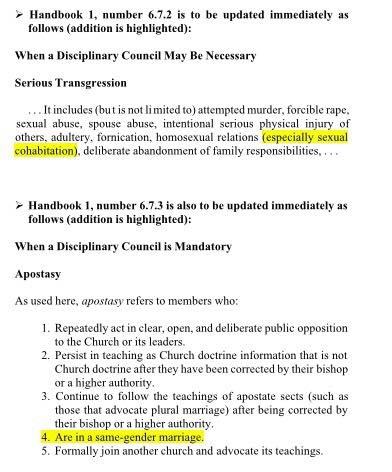 To me that screams excuse. Especially when the kids are required to disavow their parents gay lifestyle to even be considered for admission into God’s only church. Maybe they really believe in this idea that is it for the kids. Who knows, maybe God did come talk to these guys about the gays just like he told Joe to marry Nancy even though she didn’t want it. I’m sure that kids in general don’t want to disavow their parents love and happiness right? I guess in a way it is like the problem with polygamy that to this day plagues the LDS faith.

You see the fact that no leader ever, ever mentions is they never really stopped believing in polygamy. Not from an eternal perspective anyway. Listen to Elder Oaks describe the relationship he has with his second wife. (And yes, he did get sealed to his first wife in the temple as well.)

Two wives? Eternally? Yep polygamy even if it is not ok while you are alive in the LDS faith is totally ok after you die. Hopefully this brings some perspective to the excuse about protecting the children from gay parents being a parallel to protecting them from polygamous parents. It never was about the polygamy. It is only about the apostate religion that still practices it… um when all the wives are alive as the same time that is. Does this make any sense at all? Is this a big crisis for the current leadership? Yeah it is. Fortunately Dallin has advice for them too.

Does all this dancing around making excuses make sense to you? Is this really how illogical and confusing God’s one true church is? Personally I don’t think so.
And if you are one of the believers that had your shelf seriously rocked by this whole situation. Maybe, just maybe you are beginning to suspect that too.

The real question if you believe that children should not be held accountable for their own choices by a just and loving father in heaven is this. What are you going to do about it? Quietly submit and let the bigotry fester? Or are you going to speak up and take action?

It was interesting for me listing to this talk from Elder Oaks from a totally different perspective than I used to have. He proclaims it is all about timing. I kept thinking about the timing of blacks getting the priesthood and how the entire equal rights moment happened in the LDS faith some twenty years after the fact. Twenty years after rest of the world realized discriminating against people based on the color of their skin was NOT a good thing the leaders of the LDS faith had a revelation to end this demeaning practice. 4 Timing in hindsight it is obvious isn’t it? Too bad there aren’t people that can tell us the future in situations like this right?

Either way I did find a part of the talk in which I agreed 100% with Elder Oaks.

The most important thing in our lives is to do the right thing. Personally I think the golden rule is a good way to figure out what the right thing is. Don’t you? 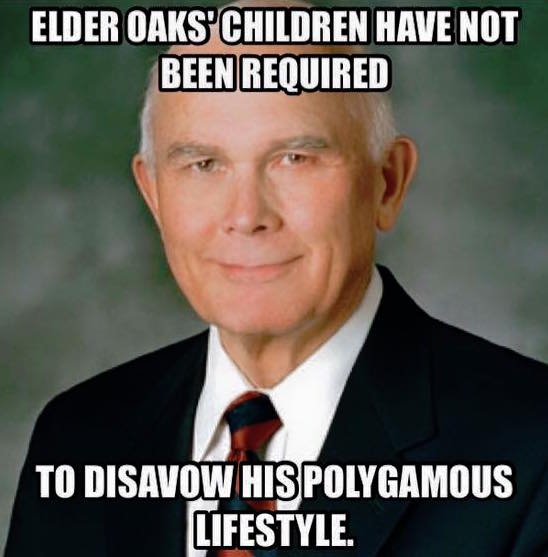