The Right To Speak Your Mind

So in LDS news recently and even making national waves is the excommunication of John Dehlin.

To me the Mormon faith in this latest action turns ever further to the stagnancy of orthodoxy like seen in other religions that promote their ideals as the only ones that God whole heartedly supports.

I have often said that religions are born in rebellion and die in orthodoxy. This is a repeated pattern throughout human history. The religion clings ever harder to its ‘doctrine’ until at some point all rational people dismiss it as simply silly. At which point the religion dies. This can take quite a while, but if the religion doesn’t change with the times, it does eventually die. Don’t believe me? How many people do you know that worship Zeus these days?

But I digress, the LDS church that Joe Smith started initially was highly upsetting to the status quo, it absorbed the latest scientific/religious/philosophical1 thinking of the day and presented those as its doctrine. (The whole indians are lost jews idea was pretty prevalent at the time, voila we have a book about that!) To one that studies the similarities of the scriptures relative to the writings of his time and place you see lots of these ‘coincidental’ stories and topics appearing in literature that were essentially canonized as scripture in the founding of the church. 2

Joe’s church was a rebellious religion, it flat out called all the other churches stupid, ok well just an abomination. They were sooooooo far off based that God needed to make a new one. At its outset Joe taught this:

“Mormonism is truth; and every man who embraces it feels himself at liberty to embrace every truth: consequently the shackles of superstition, bigotry, ignorance, and priestcraft, fall at once from his neck; and his eyes are opened to see the truth, and truth greatly prevails over priestcraft. …

“… Mormonism is truth, in other words the doctrine of the Latter-day Saints, is truth. … The first and fundamental principle of our holy religion is, that we believe that we have a right to embrace all, and every item of truth, without limitation or without being circumscribed or prohibited by the creeds or superstitious notions of men, or by the dominations of one another, when that truth is clearly demonstrated to our minds, and we have the highest degree of evidence of the same.”

You see questioning in the status quo was part and parcel with the beginning of this faith.

Other leaders reiterated its importance too.

“It is better not to have so much faith as to believe all the lies.”
Hyrum Smith, brother of Joseph Smith

But there is talking the talk and walking the walk. Enter John Dehlin. He gets the boot, according to his stake president this is the reason:

So what gives? Can a person not criticize the church? The short answer? Yep. In fact you even make an oath in the temple to not criticize its leaders, oh and bonus for us 40 somethings that went pre 1990 that oath included a penalty of death.4

I would like the people who happen to read this blog and think this is ok to think about this deeply. Consider the same situation but from a slightly different perspective. If a person were kicked out of America for criticizing president Obama publicly would you think that was a reasonable thing? Is this the action of a religion dedicated to bringing all truth under its wing? Or is the action of a organization that would ban anyone that doesn’t tow the party line?

The facts are simple, John’s right to speak his mind never came from the church, it came from the nation he lives in. Ironically the right his church has to kick him out for contrary beliefs is also supported by that same nation.

The fundamental right to believe is sacrosanct in America, but the so is the right to criticize those beliefs. It is what makes our nation great, it helps us expose error and further progress! We can believe god is the white appliance in corner of the kitchen or that he is a racist jerk that segregates people by the color of their skin, we can even believe in no god at all, and our nation will protect those rights to believe or not. But the right to criticize and to question those positions is just as important. It’s what keeps us from becoming proles.

So John, sure the church has every right to kick you out of its club,5 but that doesn’t mean you should ever stop thinking independently. Thank Fridge you live in America. 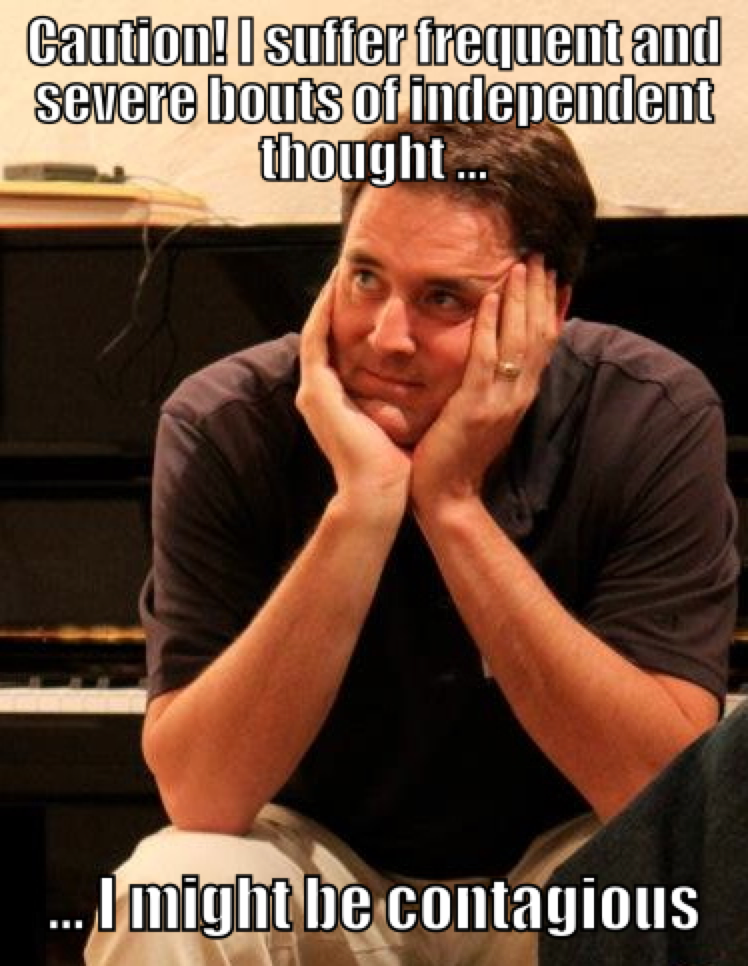