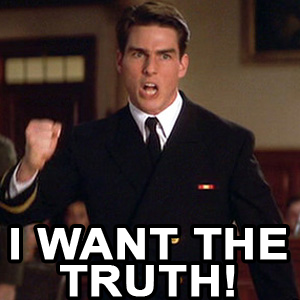 And consider this one:
http://churchofthefridge.com/2014/01/19/the-glory-of-god-is-intelligence-now-stop-thinking-about-it/

One of these articles clearly discourages free thinking and communication of different ideas. It basically says to stop thinking and be damn sure you don’t tell anyone those scary doubts that creep into your noodle. The other one points out the dangers of shutting off your brain and not questioning the status quo. To steal from MMM’s home page, ‘one matters.’

Which do you think personally is more important? Blind obedience or intelligent introspection? Carefully culled sharing of information or open dialog? I seriously think that most people if given that question in absence of any backdrop of debate would most likely side with the intelligent/open dialog opinion.

Which article gets more traffic? I can’t for sure say how many hits the MMM piece has, but since he recently posted his blog passed 2 million views in about a year, one can assume it was quite a lot. 1 This post on the Fridge door? Comparatively it was read a measly 2500 times.

1. My writing sucks, very high possibility I will give you that!

2. Getting a major news outlook to carry your post, big coup. Guess it pays to be on the side of the corporation that wants good propaganda .

3.  We seek to confirm our own bias more than we seek truth. 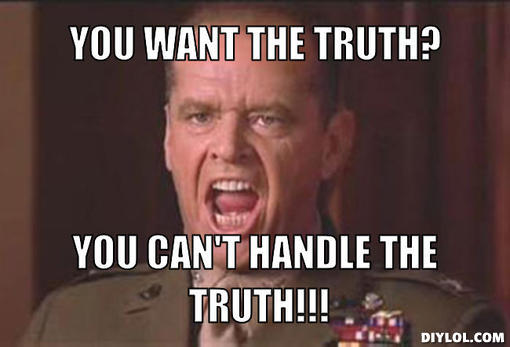 I’d say that it is more likely that the second and third reasons are behind the popularity than the first. 2 Why? Because there are millions of people that feel the same way the MMM does. Relatively speaking there are very few that have allowed themselves the freedom of thought that this man does not and thus have arrived at a different conclusion in regards to the religion he is so confident is the one true church of God on the planet. Millions are looking for confirmation of the truth of that which they already hold dear. It is actually something that people will actively do when faced with uncomfortable facts that they can’t deny. In psychology terms this is called the backfire effect.

These days there is much buzz challenging the authority of  religions over the minds of men. Most likely due to the rise of the none’s, militant atheists and a growing secular humanist movement. All this discussion will for a period of time actually enhance the traffic to the sites that willingly confirm bias even when they actively discourage free thought and sharing of ideas.

It also helps that the establishment has funding and influence to promote propaganda that is sympathetic to its cause.  Do you really think a church/corporation that wholly owns a marketing company that brags about its ability to sell you on something using your heart would pass up an opportunity to help you doubt your doubts? 3

The fact of confirmation bias and the ability for a majority to influence a minority, simply via propaganda, means ideas have mass. They don’t just disappear, even when proven wrong. It takes time and patience to replace a falsehood with a truth. The natural reaction of the endangered idea is to band together with other endangered ideas. I think that is why recently Dallin Oaks said the abominal church  “…must be any philosophy or organization that opposes belief in God” This is a far cry from the foundation of Mormonism when Joe Smith declared that God told him all the other religions “…were an abomination in his sight.” Back then it was other religions the idea was competing against, now the biggest threat is no religion. Outdated ideas don’t die easily, they go kicking and screaming.

Religion has an ability to capture the mind of man, we long to believe in a cause that is bigger than ourselves. When mythology is held up as truth via religion it will capture this imagination and desire that is innately human. So how do we change an idea? By understanding the purpose it plays. Don’t forget that religion fills a need inside to be part of something greater, it satisfies a desire for wonder and imagination. So next time a believer asks you what you have to offer, realize that they aren’t just looking for the truth, they also want fulfillment, wonder and hope. Don’t forget to tell them how lucky you feel to be here and now, how wondrous it is that you are a walking talking collection of stardust. Don’t just tell them why their beliefs are mistaken, tell them metaphorically why the Fridge is true and how much more wondrous the world is when you don’t approach it wearing the shackles of preconception. Chances are they will listen better.