Let sleeping dogs lie… that’s the phrase, I remember it as a kid. I remember seeing some really scary dogs too and how passing one laying there asleep this phrase made a lot of sense to me. Now that I am older I realize that the reason it made sense was one and one only. I was fearful. I was fearful of the repercussions. Wake that dog up and you could get bitten, you might get hurt or chased, after all it was a big dog! I never really considered that it might be a nice dog and we might end up playing together and having fun. No, the reason the dog laid there sleeping as I passed by was because

Humankind spends a lot of time falling inline in my opinion. I believe we are somewhat hardwired by this fear of outcome to not take action, even when our deepest moral compass compels us to.  Falling inline causes companies to form and political parties to group together. One leader can galvanize a group because we naturally fall inline.

This is a blessing and a curse. As a group organized and formed to one purpose we are more powerful we can accomplish great things. Pyramids can be built, immense problems solved, great things can happen when we band together. There is a price to this natural tendency though, wars are fought and people are killed for nothing more than thinking differently than their neighbor. If people didn’t fall inline naturally this couldn’t occur. If we were all completely independent there would be no way to create a hierarchy and get organized. Falling inline is normal, but why do you do it? Is it because you are worried that waking up the sleeping dog from its slumber is going to go badly? Or is it because you have a vision of something greater? If your fear was a bigger factor than your vision then maybe the regime you are part of isn’t a productive one.

If we do the same ol’, same ol’ without question we will never know what might have been. If we don’t poke the dog in our life and just let it go on sleeping, we might never know if we were trapped in a place where we just thought we were happy. We might never the know the truth if we leave all the dogs in our life asleep and neglect to turn the ‘quo’ on its head once in a while. Some might say Profet you seem to be on a quest, and they are right I am. I am challenging the status quote and I am not leaving well enough alone, I am trying to pet the sleeping dog. Why do that? Why can’t you leave it be? Because I think there is more to life than living on autopilot, more to discover and more to learn. I know I don’t know it all, but I love trying to learn about it. Like any quest that comes with risk, bad things might happen. It’s true they just might… many people like the quo right where it is and certainly don’t want things to change and they might not like you petting that dog either. Lots of bad things might happen. But great leaders didn’t rise up by being afraid of what might happen, because

I bet Martin Luther King was told more than once he should just leave things be, yet from his point of view and his experience something wasn’t right and it needed to change. He didn’t leave or run away though, he challenged the status quo and woke up the dog. Great people take a stand when they think they have truth to share. When they think people are being fooled or mislead they speak up. Why? Because it’s the right thing to do.

That is the way I feel when I point out the errors I once made, when I tell others this thing I once thought… well I was wrong. There is a better way. Some don’t like it because they feel betrayed or they don’t welcome the change of perspective. That is inevitable when you stir up the hornets nest, when you don’t leave well enough alone and when you don’t just let sleeping dogs lie. The reason to sail along without speaking up or saying what you feel deeply about is only fear. Here is the secret though, you don’t really know how scary that dog is. You have never seen it awake.

So the fear, the ‘might happen‘ that is all in your head, no place else.

Petting the dog and waking it up is risky, I’ll give you that, you might get bit, you might even 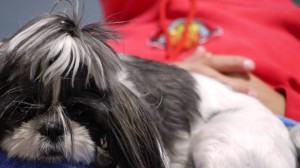 be permanently scarred and end up regretting it. But just as likely, you just might end up with your new best friend. So my advice in life. Take a little risk now and then, pet a few sleeping dogs, wake them up. Challenge the proverbial status quo. You just might find a new friend or two that you never expected.