The Context of Doubt

I just got done reading the latest effort by the LDS faith to get people to doubt their doubts. It’s titled Overcoming the Danger of Doubt and comes from Elder Hugo Montoya. I don’t know if it was the Fridge inspiring me, but I kept hearing this line from Princess Bride as I read it.

Doubt is certainly the thing religions fear most. In fact you pretty much have to doubt you are in the right religion to convert to another one. I know as a missionary for the church I saw more than 100 people doubt their previous faith enough to be baptized into the Mormon one. I only realize that in hindsight now though. At the time I was 100% sure I had the truth that I was offering to them. Never once did I think that doubt was something to be feared. After all truth doesn’t fear doubt right?

In this article I noticed that as usual there are personal stories that illustrate the principle. In this case how you ‘shouldn’t doubt.’ But aren’t those kind of stories in all religions? If a scientologist gets help from sea org, does that really mean you should not doubt the commitment you made to scientology?

Doubt is a wonderful thing, it’s not dangerous at all. But it is scary. Truth doesn’t fear doubt, but humans do. I was afraid to doubt my faith because of the ramifications if those doubts were realized. To me it meant a loss of hope, a loss of community and potentially the loss of family. But I found new ways to hope and new communities to belong to. My family didn’t survive the faith crisis without scars though. It could have been better but it also could have been much worse. I count myself lucky for the most part.

So yeah, to be totally honest, doubts can cause some pain if realized. But they also serve a useful purpose. If you are investing with Bernie Madolf and you hear a story about him that causes you to doubt. Clealry in that case checking out that doubt is a good thing and it could prevent you from further losses. But do you think that you might feel some pain discovering you were bamboozled? I think so. That isn’t the fault of the doubter though right?

I think it’s having your doubts confirmed that hurt the most. How much, depends on how deeply you held the belief that crumbled under the spotlight of doubt. Especially when the community you doubt is legit helped you in a time of need like Elder Montoya. But I don’t think that means he should call anyone or anything that causes doubt ‘dangerous.’ It’s too easy to get the impression that the natural fear that comes with doubt is a sign. It’s too easy to blame the doubter for simply questioning. And far, far too often it drives a wedge between families that believe and those that don’t, just because they doubt. This whole Ensign article1 is filled with manipulation based on fear. I’d sum it up like this.

Hello, my name is Hugo Montoya, you doubted my religion… prepare to die. 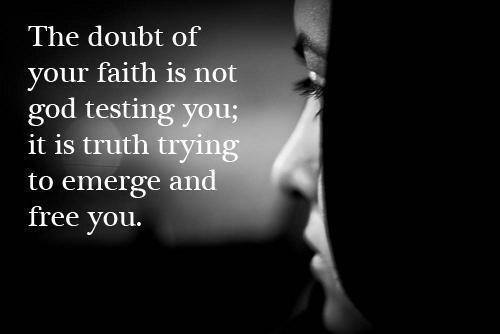