I don’t know if my readers can tell or not, I don’t write all that much specifically on Mormonism these days. I think that is normal. This blog being initially cathartic during my transition away from the LDS faith has become more of a social commentary for me personally. It also seems to be a half hearted attempt at shining a new perspective on keeping the positive aspects of faith in a world that is becoming increasingly secular.1 But today is an exception. Today I watched the new First Vision video that was recently released by the LDS Church.

This video is admittedly a mashup of 9 different accounts of the first vision. It is complete with modern sound effects and plenty of emotional theatrics. The reason this video bothered me enough to return to a post that is specifically Mormon related?

Simple, the stuff they left out. You see my own journey out of the faith involved a lot of study on the first vision. I spent weeks reading each account and creating a timeline of events to help me personally understand what happened and when it happened. In fact a large chunk of my work ended up here on a website created by a friend that had a similar interest at the time. http://firstvisiontimeline.com.

Now there are plenty of step by step comparisons of these different accounts on the internet. Here and here are a couple of good ones for further study. Even if I were willing to go into painstaking detail on this post, I have learned that people who don’t want to question don’t care about the details.  People that are willing to be wrong will look them up on their own. So consider those links to be some teasers if you really want to better understand this ‘historic’ event. I’m sure a little googling and you will find a plethora of detail on your own.

I’d suggest this first mashup of the first vision, is really important as far as the LDS church is concerned. You see up till now the primary narrative has been to repeat the canonized version that is the churches scriptures. That narrative doesn’t hold anymore as Richard Bushman, LDS historian and believer points out.

It’s part of the effort of modern leaders (that I personally think have been as surprised by the actual history as I was) to come clean and retell this stuff in light of availability of information on the web. Information that in the past was dismissed as anti-mormon rhetoric, not to be believed. That doesn’t work anymore since anyone with a little curiosity can quickly find most of this ‘anti’ stuff is by and large legit historical fact.

That means this new video is part of the effort to inoculate members against the complications of discovering the history of the church wasn’t all that much like you were taught it was.

Let me put it in Elder Snow’s words:

“…And now curriculum and seminaries and institute can safely weave these essays into a future curriculum to in a sense “inoculate” is a word I use quite a bit for the rising generation.”

Now I totally balk at the idea that truth must be a disease  requiring the seeker to be protected against it. Maybe that is why this video release struck a nerve bringing me to a keyboard today. Because when this apologetic tripe goes down, I see subtle deception at play. It’s done by half truths. For example:

In this video the opening text identifies when these accounts were written.

That part is true, but right off the bat I think some important information is left out. The fact this took place in 1820… 12 years before the first account, and 18 years after the official account isn’t mentioned.

Why is that relevant? Because we don’t naturally expect a world shaking vision to remain unwritten for over a decade, let alone 5 years after we have accounts of Moroni and the plates and 2 years after the church this vision was presumably all about was founded. Maybe they left that part out even though it’s clearly stated in LDS cannon because these other accounts don’t much agree on when it actually happened, one says he was age 14, some 15, others 16, 17 even 18 years old.

For me personally half truths are the worst kind of lie, the ones that the used car salesman uses to gain your trust while selling you a lemon. Unfortunately this video is loaded with them. Please don’t take my word for it, go find all the original accounts and read them for yourself as you watch it.

When I did my own research, the timeline presented a far different narrative as to what went down and when. One detail left out from all the apologetics is the fact no one really talked about the first vision till the late 1850’s. Another are the common themes found in the 1838 canonized version shared with the obituary of a 14 year old boy who saw God and Jesus and just happened to be printed in paper that Joseph Smith was the editor of a few months prior… 2 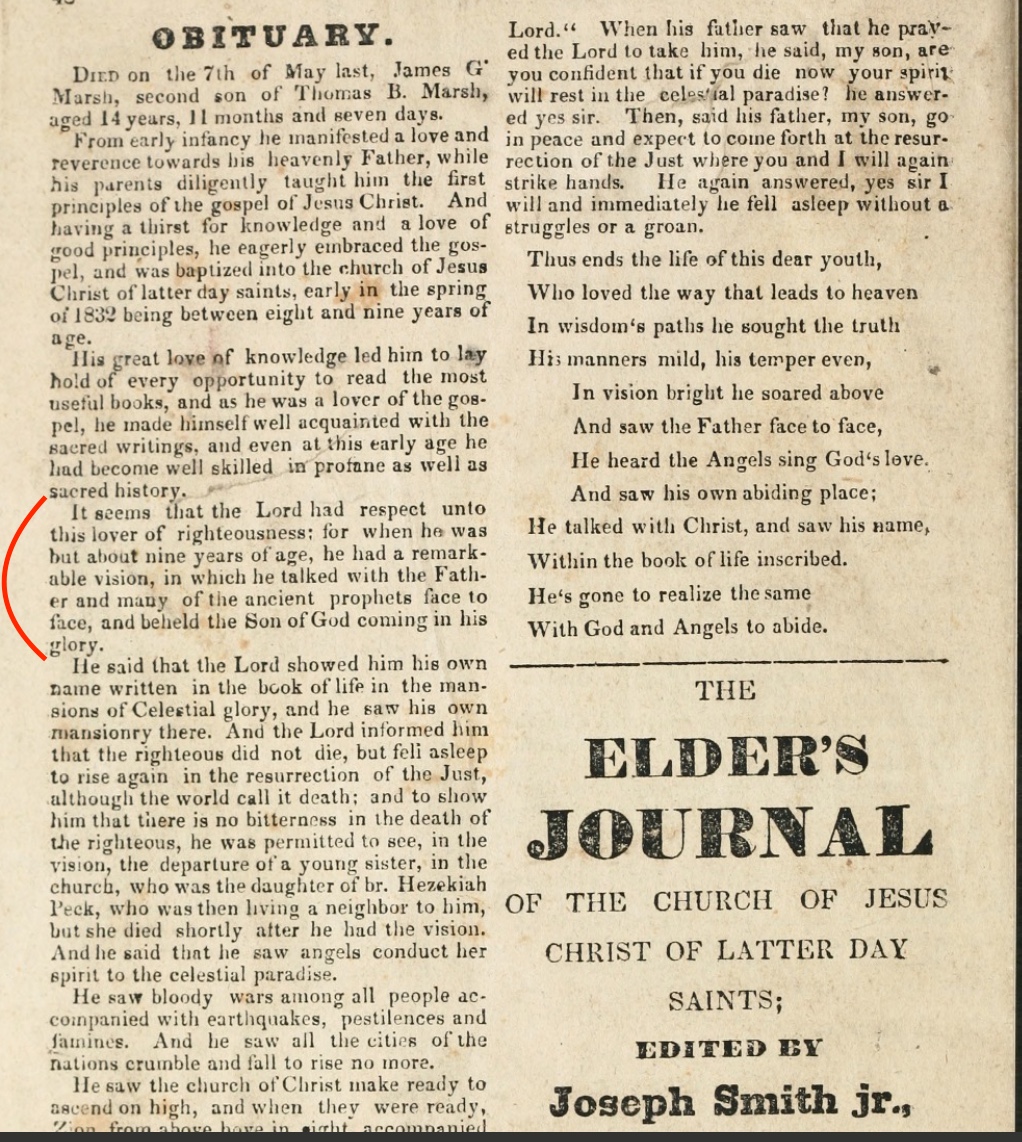 Could it be that JS was just retelling the angel Moroni story and it took on a life of its own? That would explain how up till nearly 1860 all the leaders of the church talked about was the story of the angel that visited Joseph, completely omitting the idea that God himself came down to get this ball rolling. Could each retelling be a fabrication rather than a recitation of events that happened? Maybe a one-up on other visions being talked about in the community so that Joseph was always the most prophetic?

That’s something you will have to decide for yourself. Maybe it really occurred and this messy history is the best God can do for his one true church. After all that’s what the apologists would have you believe.

Here and now though we can look closely at what we are being told by this new video. It’s obviously leaving out some pretty big details that I think would matter to anyone investing 10% of their income in buying the reality of this story.

One of the biggest IMO? They totally gloss over the part where God calls all other churches an abomination. Probably because these days God is more worried about offending people of other religions than he was back in 1838. 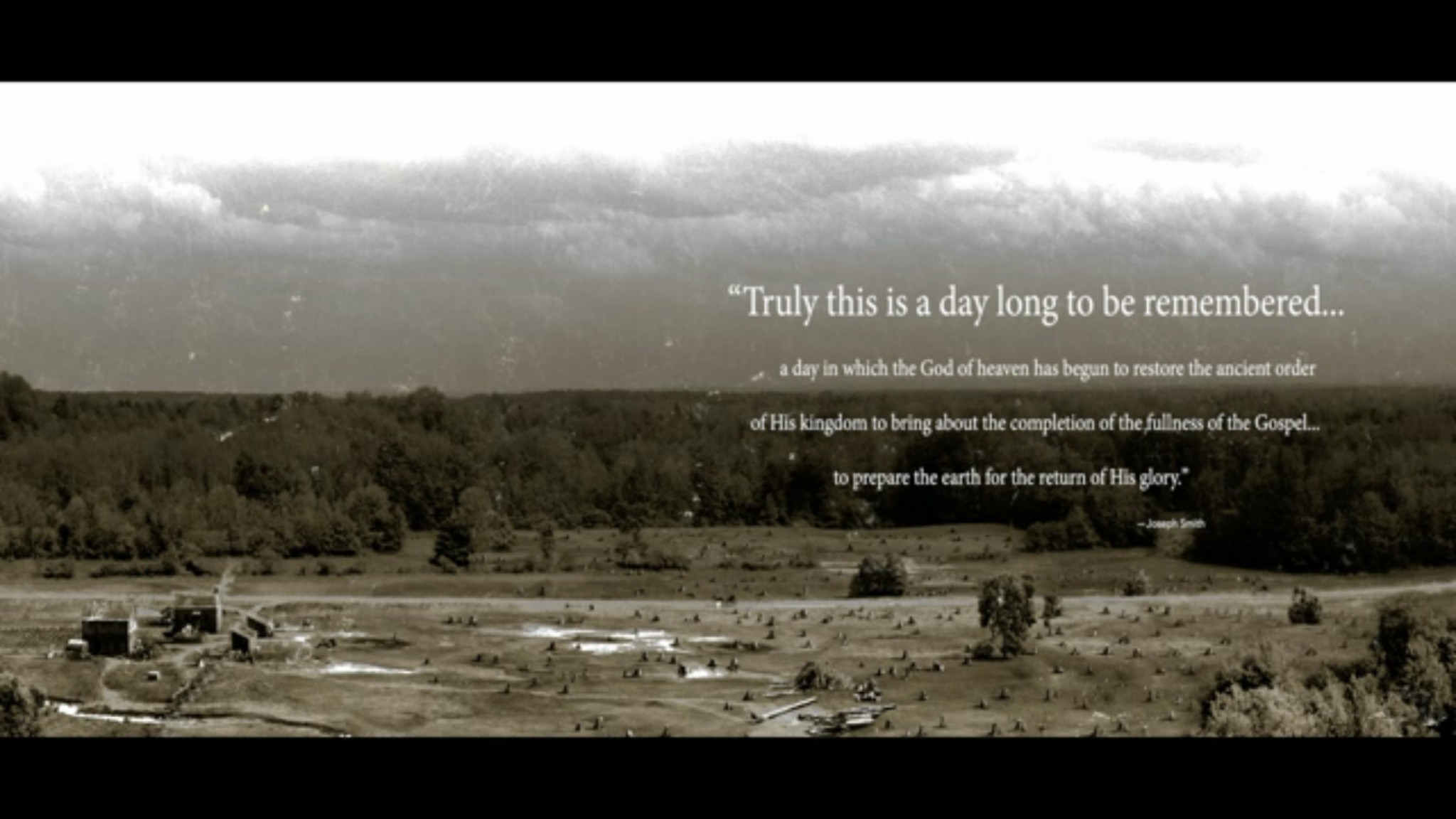 Is the first vision an important event that it warrants a lot of investigation on the part of those who would believe? I think so, after all these are things of eternal importance. So important that you should wait 12 – 20 years to write them down and nearly 40 years before you talk about it. Am I right?!!

I doubt this is the first historical mashup we will see as apologists take over the official narrative of church history. Gone are the days of clear obvious church statements. We are now in the world of mushy careful wording to support shelves heavily weighted with readily available facts. Obfuscating mashups are the new normal. Or to put it in terms of a Jedi to the weak minded… these are not the droids you are looking for… *waves hand*