As man now is, God once was, as God now is, man may become 1

This is my favorite doctrine of the LDS church, let me explain why. In one swoop it resolves all the quandaries of where God came from, it implies limits to his powers. In many ways it makes a lot more logical sense than an all loving/all powerful being that condemns his imperfect creations for not being what he wanted after he made them. At the same time it gives us the hope that we too one day be just as awesome as we think he is.

The concept is based on the King Follett sermon given by Joseph Smith Jr. not long before he was killed. The founder of mormonism over time adjusted his views on God and landed on this very new concept which he spoke of at brother Follett’s funeral. It was so new that Christianity at large cried foul and has been reiterating it ever since.

This is likely at least one of the reasons the church recently released this article as part of the answering-all-the-internet-questions essays that have been slipped onto the church website over the past several months. It appears that the church is quietly backing away from this once very unique teaching. It used to be taught that one day we would inherit worlds without end, just like our dad in heaven. Now in this latest release that idea is downplayed as a cartoonish characterization by the church’s detractors. 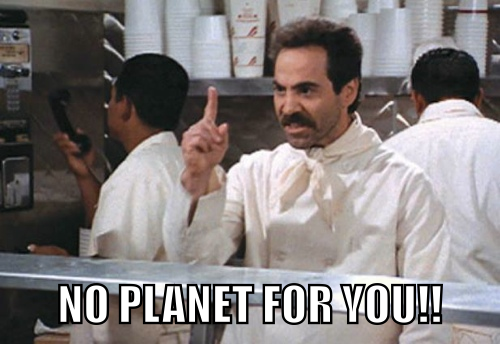 As a person brought up in the religion very much being taught one day I’d be god over my own world or worlds (not to mention the eternal sex) This does feel a bit like getting the soup nazi treatment.

So much like the blossoming rose of the Lamanites and the color cursing of skins yet another of the unique LDS doctrines is being quietly modified to make the church seem more mainstream and a little less crazy to the world at large. Just compare this snap shot 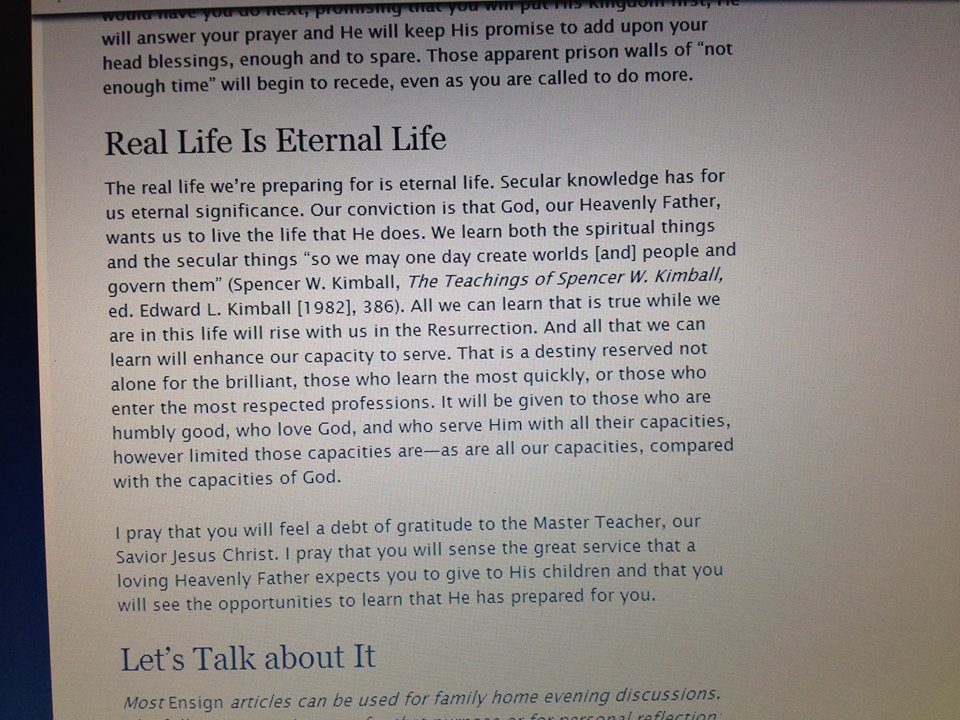 of an article on the topic in 2002 to this  2009 article with the same topic now. (Here is a second snapshot to make the comparison a bit easier) *please see edit below, who would have expected these guys self plagiarize! 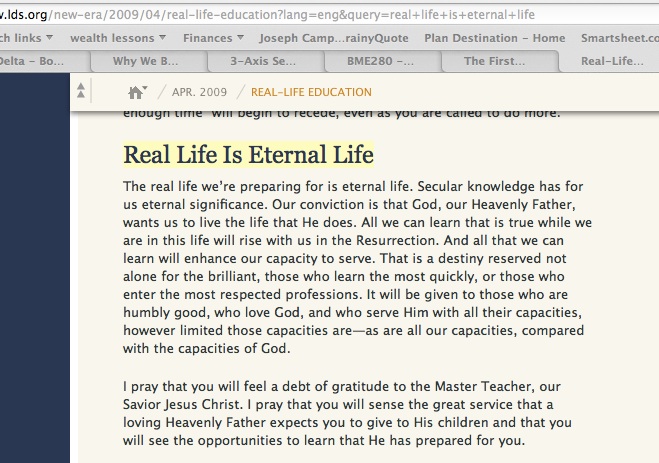 Now you see the quote from prophet, seer and revelator Spencer W. Kimball, and now you don’t, just like magic it never happened. Quietly erased from existence the church now pretends the teachings of the prophet of my youth never happened.

To be honest this makes me sad. Why? Because like I said, it’s my favorite doctrine! 2. The reason I think so is because I am very hopeful and enamored by the idea of eternally learning, progressing and one day achieving something transcendent. Personally I would often think about having my own universe or planet one day and how different I would design it to be. Certainly I wouldn’t set up such a confusing methodology of discovering truth that you see amongst the religions of today. Also on my world there wouldn’t be any need to worship me. I mean really, why would I command people to adore me? That petulant behavior seems more like Q from Star Trek than the type of loving guiding father I try to be. I believe a father wants to help his children exceed any achievement he ever made and cheer them on while they do so. No need for worship in my universe.

It strikes me as I write this that it is human nature to reach for the stars, maybe this is the reason religion will never disappear from our society no matter how irrational it may seem. For just maybe it is because of our irrationality that we are so successful. We are just crazy enough to believe things can be done that are seemingly impossible. 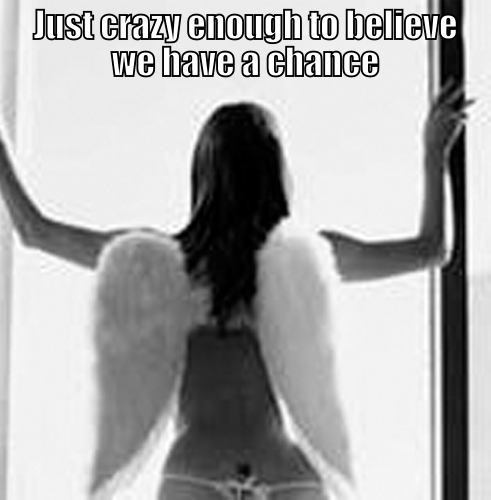 Rather than condemn this very nature and the zealots of all types it produces, maybe we should celebrate it. Because if we believe there is a chance and we take that big bet it might just payoff. The only thing that assures we won’t win against the odds is refusing to play.

Joseph Smith imagined an eternal string of exalted beings going forever back in time, con man or pious nutcase that he was, it is still a pretty cool idea. These days science has shown us there is a definite beginning to the universe. Was there a dude that started it all? Did all of the cold in space spring forth from the Fridge? We really can’t know, at least not yet. If it is a grand design there are some really big questions on my mind for the creator. If we are all just lucky to be here on the roll of some cosmic dice, then I say lets take advantage of it. If we don’t it is a mighty big waste of space. If there isn’t a string of gods going back in time, so what! Nothing is saying we can’t be The First Gods and start our own eternal string of universes.

Do I think I have a chance of being one of them? I hope so, but if not, Fridge knows I am going to instill in my posterity the indomitable will to go for that crazy thing that others say can’t be done. So even if it is just a trace of my DNA a thousand years from now that controls godlike powers in a future that I can hardly even imagine a piece of who I am will live on. That is a bit of immortally that I am positive I can affect immediately. I believe that mankind as a whole will one day achieve immortality through its own efforts. I predict when when we reach the singularity in the next few decades some very amazing things will happen, I hope personally that I will hold out till then because I just might partake of eternity in ways never expected when I was born. Our technology advances as quickly as it does because we combine our scientific approach with wild and crazy ideas that capture our imagination and drive our innovation.

So for all the rational logical thinking that surely help mankind progress, it is the council of the Fridge that while you are reasoning and figuring things out don’t forget to embrace a little crazy. It might lead to Godhood one day.

“Let’s think the unthinkable, let’s do the undoable. Let us prepare to grapple with the ineffable itself, and see if we may not eff it after all.” ~ Douglas Adams

EDIT:
So the Exmormons that follow the Fridge are some pretty astute fact checkers and caught a mistake I made unintentionally in this post. After a friend sent me the photo with the quote from SWK and I searched for that topic on LDS org to find the source and found the 2009 article that I took a screen shot of, didn’t notice the hit from 2002 in my search.  Turns out they are from two different articles. I had no idea that these guys reused and modified their own talks. Here are the two items.

where the first pic comes from.
https://www.lds.org/ensign/2002/10/education-for-real-life?lang=eng

where the second pic comes from
https://www.lds.org/new-era/2009/04/real-life-education?lang=eng&query=real+life+is+eternal+life

my search used to find it on the LDS site
https://www.lds.org/search?q=real+life+is+eternal+life&domains=all&lang=eng

I think it is fair to say that the topics are being modified as the church progresses forward as show by the change from 2002 to 2009 as well as the release on the topic recently posted. In this case however the original article was not modified. It was my unintentional mistake to make that implication in my first release of this piece. I have made a slight modification to the article to remove that implication.