The Math of Creation Doesn’t Compute

The bible says God took 6 days to make the earth. Now for the believer reading this before you start polishing up your metaphorical sword1  to do battle on the topic, hold on a sec ’cause the Fridge already knows what you’re thinking.

A day isn’t really a day right? It is some sort of span of time, could mean years, thousands of years or even millennia of millennia. Your argument is a day is just a period relative to God’s point of view. 2 We aren’t really sure how long it is because we don’t measure time the same way God does. The beauty of this metaphor is that the person that it helps the scientifically minded still believe, you know the type, happy with the fact science gave us things like computers, medicine and Facebook. They like to think of God as the kind of guy that uses the physical reality to accomplish his whims, only resorting to magical God power when no one can actually measure it. You know, to keep faith relevant and all that. 3 But I digress.

Let’s say a God day is whatever length you want it to be. You decide. Because no matter how long you make it, the math of the creation story doesn’t make any sense. Let me explain why.

Even if you don’t count the fact we are discovering planets around all those starts out there4 it’s still a lot of stuff!

My point is if you do the algebra it doesn’t matter how long the creation periods are, it still doesn’t make sense. It would absurd to insist otherwise.

Maybe I can spill forth the light of the Fridge in another way. Lets assume for a minute that the universe is as old as science currently says. Call it 13.8 billion years. We divide that by 6 (because there were 6 periods of construction) that means each ‘day’ would be 2.3 billion years long. Now if God were making all the stars in one ‘day’ as the bible said, God was making 5 billion stars every second of every day for 2.3 billion years. Now sure you can say God is really good at making stuff, he is God after all. But then you have to ask the question, if God can make 5 billion stars every second, then why did he need 6.9 billion years to make the earth?

Still think it makes sense? The Fridge inspired me to do a little more math to help you grasp the concept.

Lets assume all the stars are much, much tinier that our sun. For a moment say you could hold one in your hand. If every star was a 1 inch marble in size, all of them piled together would be about 100 times larger than the earth. Even if all the stars in the visible universe 5 were the size of a shooter marble it would take 1 day to make something 100 times bigger that the thing that took 3 days to make. Even when you do something as absurd as shrinking the size of stars down to marbles, it still doesn’t make sense. Not even remotely.

Here is the thing though, to the shepherds and priests and old guys looking up at the stars without a Hubble telescope the stars were just tiny dots. They looked pinholes in a curtain that they had named heaven. They didn’t have things like GPS and astronomy or even a crappie telescope when they were writing the bible  so you can’t really fault them. They were just trying to make sense of the world with the best tools they had at their disposal in their day and age, plus they liked telling stories around the campfire.

The roots of religion are about discovering truth, human nature however has a tendency to twist ideas into dogma over time. Science has picked up the ba 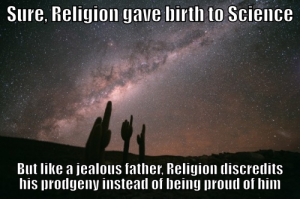 nner of truth discovery that religion started and taken it much, much farther. It does this by finding ways to get past our natural tendency to create dogma from something that sounds plausible and figure out ways to prove it is right. In both cases our desire is truth, it is only the method that changes.

And just because a little math might actually disrupt some of our deepest convictions, doesn’t mean we can’t still enjoy telling a good story around the campfire. 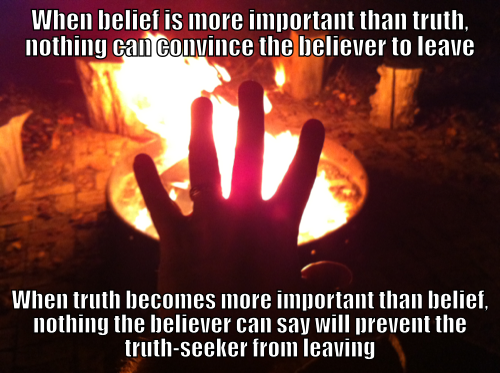