The One True Church of Internet Mormons

“If you want to know what a Mormon believes, you should ask a Mormon, not a critic or a book or anything else.” -Every Mormon ever

“Don’t tell me what I believe.” -Also every Mormon ever

I’ve been a part of a number of debates recently with some Mormons online who express a more liberal belief, wherein they insist that it’s acceptable in God’s eyes for a person to follow whatever they feel God tells them. That sounds great to most religious people in general, but that is not what Mormons believe.

I can just hear some Mormons shouting right now, “Oh yes it is! You are a liar!” Dear Mormon, allow me to remind you of what you actually believe.

Say I’m investigating your church and the Baptist church at the same time. I read the Bible and Book of Mormon both in their entirety. I reach the point where I need to ask God which church I should join. I ask sincerely, with real intent, having faith that God will answer, and he does. And he tells me I need to be a Baptist.

Now, more and more “Internet Mormons” when they hear stories like that are responding, “That’s great! You need to follow that path!” And I agree with them, personally. If you have an experience in which you feel very strongly that you should follow a particular spiritual path, and it’s not harming you or anyone else, then you should follow it if you feel so inclined. But that is not what the Mormon church teaches. The Mormon church teaches:

“And also those to whom these commandments were given, might have power to lay the foundation of this church, … the only true and living church upon the face of the whole earth, with which I, the Lord, am well pleased…” -God Himself 1

They also believe that the LDS church is the only church with authority from God to perform essential saving ordinances that allow one to live in God’s presence. 2 They teach that you absolutely cannot live in God’s presence if you live your life as a Baptist doing good your entire life, but refusing to ever be a Mormon (now or in the eternities) because you feel you’re following what God has told you. They also believe that God would never tell someone to join another church and stay there forever if they met with the Mormon missionaries, read the Mormon scriptures, and sincerely wanted to know which church is God’s true church, but yet that has happened to many, many people in this world. To make sure I wasn’t insane and that the church didn’t change its doctrines to agree with what Internet Mormons are claiming, I chatted with a few missionaries to get the truth: 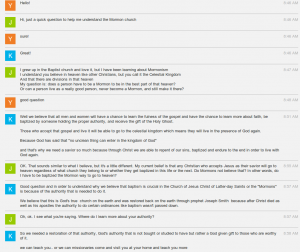 This LDS doctrine that God has only one truth and only one church has become a point of dissonance for many Internet Mormons because they want so dearly for the idea that people can follow any spiritual path they want to be true. They want it to be true because that’s what a loving compassionate person would believe. That’s what mainstream religions teach. But Mormonism is not a mainstream religion – it does not teach that. If it did, there would be little need for temples (specifically proxy ordinances for the dead). Mormon missionaries’ instructions would be completely different. Many of the church’s other required teachings would of necessity be different as well, such as tithing, the Word of Wisdom, Sabbath observance, etc., because once you allow people to believe in whatever god or religion they want, you have to allow them to believe in whatever religious teachings they want across the board.

Mormonism is a very rigid dogmatic religion at its core today. You are expected to follow what the prophet says and maintain a current temple recommend, which requires you to follow a strict set of rules and beliefs that other religions would not require. 3 And if you don’t follow them, you are risking your eternal salvation.

For any Mormons out there that disagree with me, I suggest you try this: leave the church. Live your life in service to others doing more good than you ever have, but without Mormonism. If you did that, how would your family react? How would your ward friends react? How would your bishop and stake president react? You know exactly how they’d react. They would not be ok with you following that path, even if you felt God specifically told you to follow it, and you know it.

To be clear, I think it is wonderful that so many Mormons are accepting of other viewpoints and spiritual paths these days. But when they proclaim to non-Mormons that they believe their spiritual path is good as long as they follow what God tells them, they are contradicting their own missionaries. You will never hear Mormon missionaries tell their investigators to not join the Mormon church in favor of another church. So if you’re a Mormon and think people should follow whatever path God tells them to follow, you need to either get in line with what your prophet says or you need to start believing and proclaiming that the LDS church is not the one true church, and that “cafeteria Mormonism” is acceptable at all levels of church leadership and belief. It’s time Mormons own up to what they believe about their own church. The Prophet Gordon B. Hinckley said:

“the Church … will expect loyalty from those who profess membership therein.” 4

I don’t care if you’re an uptight chapel Mormon or the most liberal Internet Mormon. 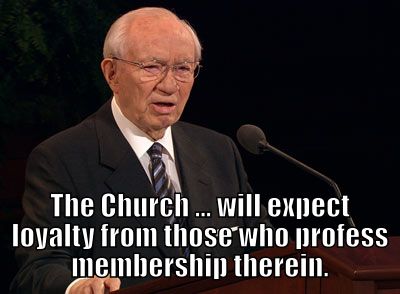 Own your religion. According to church leaders you can’t be lukewarm. In the same talk referenced above the prophet of the church said:

“Each of us has to face the matter—either the Church is true, or it is a fraud. There is no middle ground. It is the Church and kingdom of God, or it is nothing.”

Bear in mind, I’m not the one telling you this – it’s your leaders that are saying it. If you disagree with your leaders you are essentially a Korihor like the rest of us. If you believe these guys are called of God then you’d better fall in line and be loyal. Because according to your own religion’s holy books and leaders you can’t have it both ways.