Here is some math I did on tithing, being an engineer it seemed natural to run a few estimates. The first time I did this I kept asking myself why hadn’t I done this exercise before? Oh yeah, not my place to worry about where the money goes, you don’t need to know that. Just trust us we are spending it by inspiration….

Now I beg you to bear with me since this is a story problem. 🙂

Given an average family income in the US of 50K$/yr or 5000$/yr in tithing. That’s when the first alarm bell went off. I realized just my tithing alone in the ward covered all the yearly building maintenance a couple times over.

In the US there are about 6-7 million members, figure only 50% of them are active and paying tithing figure an ave family size of 3 active tithe payers. That means tithing collected is about 1 million times 5K$, or 5 Billion$ a year. Now before you say I am being overly optimistic in the money collected remember that I didn’t count anything from the members outside the US. (most estimates that are more detailed than this land about 6-8 billion a year) So call me conservative in my estimates, I am trying to give the church the benefit of the doubt as much as I can.

Now look at rate that the church is building temples, about 3/year, the cost of the DC temple was 15m, now the newer ones are smaller and more modest, in the 2-3m range. However lets use that higher number, 45m/ year in temple expenses of construction

The church has about 2900 stakes so figure at average of about 2 buildings per stake, so 6000 chapels total to maintain.

Figure 2000$ a year in maintenance (no building cleaning needed! the members do that!) That comes up to 12m/year maintenance, now just in case I am wrong lets double it and add a little make it 30m

Oh yeah church helps the needy too, they told us about tons of money given since 1985 1.4 billion dollars (including hours donated) to be exact or about about 54M/year.

Here is a 2009 sheet that shows the majority of that 1.4 billion is in donated time by members, the cash is significantly less. https://archive.org/details/LdsWelfareFactSheet2009

Did I miss anything? Lets see what Gordon B Hinckley said about it to Larry King:

“THAT’S SOMEBODY’S GUESS. THAT’S JUST A WILD GUESS. WELL, THE FACT OF THE MATTER IS, THIS, YES…IF YOU COUNT ALL OF OUR ASSETS, YES, WE ARE WELL-OFF. BUT THOSE ASSETS, YOU HAVE TO KNOW THIS, ARE NOT MONEY-PRODUCING. THOSE ASSETS ARE MONEY-CONSUMING. THOSE ASSETS, INCLUDING MEETING HOUSES, CHURCHES, THOUSANDS OF THEM ACROSS THE WORLD, THEY INCLUDE TEMPLES, THEY INCLUDE UNIVERSITIES, THEY INCLUDE WELFARE PROJECTS, THEY INCLUDE EDUCATIONAL FACILITIES, THEY INCLUDE ALL THE MISSIONARY WORK, THEY INCLUDE HUMANITARIAN WORK, THEY INCLUDE ALL THESE THINGS WHICH USE MONEY. WHICH DON’T PRODUCE MONEY. THE CHURCH IS…THE INCOME OF THE CHURCH COMES FROM THE CONSECRATIONS OF THE PEOPLE, WHO TITHE THEMSELVES, PAY THEIR TITHES, THE ANCIENT LAW OF THE TITHE IS THE CHURCH’S LAW OF THE MANSE. AND THAT’S WHERE THE MONEY COMES WHICH OPERATES THE CHURCH. IF YOU LOOK AT OUR BALANCE SHEET, THAT SHOWS ALL THE FACILITIES THAT WE HAVE, AND THE PROGRAMS WE CARRY, WE APPEAR VERY WEALTHY. BUT YOU MUST REALIZE THAT ALL OF THOSE PROGRAMS CONSUME MONEY, THEY DON’T PRODUCE IT. THAT THE MONEY WHICH WE USE COMES FROM THE CONSECRATIONS OF THE PEOPLE.”

I see I left out the universities. That would mean a lot but they do accept tuition makes it a little harder to swag at the subsides. Either way, lets throw them a bone and assume they are heavily subsided, figure 100m/yr, more than double what is spent on temples just to make sure it is covered.

He points out the missionary work too, maybe there are some poor kids that can’t pay their way like they are told to figure 1/2 of all missionaries are covered by tithing (instead of their families paying 400$ a month, that is about 120m/year. Turn’s out that the mission presidents get all their costs covered to the tune of 150K per year on average and there are about 350 of them. That is another 52m/year.

Then there are full time employees, there are about 4000 (that have to be paid directly out of tithing) that would be 200m. Don’t forget benefits, etc, lets double that to 400m to be safe. Now add it all up.

scribble scribble, carry the 1, mmm, scratch erase and fix, lets see that would be. 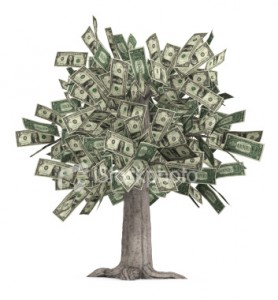 Tell me what would you do with 4.2 billion? President Hinckley is right, it is a money consuming enterprise! It freakin’ burns cash like no tomorrow. Even if the church does have assets of 30B$, think about it, just saving 4B$ a year it would only take 8 years to save that much and the church has been humming along much longer than that.

I sometimes have discussions on taxes with a friend of mine and like most die hard Mormon conservatives he always complains about how awful the government is at spending money. When I point out this simple math of his tithing he says it doesn’t matter, it’s not his money anymore. He is an accountant by trade, it flat out amazes me the ability for the human mind to eschew logic.1 He simply thinks its ok to waste if the funds are tithing because he gave it away willingly. Taxes on the other hand since those are required by law they deserve more scrutiny.  While some how not recognizing in both cases we are giving money to those that govern us. I mean isn’t tithing Gods law? (see quote from a prophet up above) The illogic shorts out my brain…

The simple fact is 4 billion $$$$ in tithing every year goes somewhere and no one knows where. They don’t tell us, we are simply assured of our blessings. Personally I think the reason why is obvious. If they told the membership what was happening with the widows mite they would be very upset. Better to just tell them don’t worry about it, we are using your sacred funds wisely, I promise and oh yeah. Don’t do the math…