What Do You Believe Now?

The journey of questioning everything you believe is an interesting one. If you ever take it, I 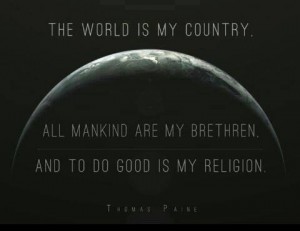 suggest making a list, it helps you see what you really believe and it is very therapeutic. Particularly if you are truly honest with yourself about the things you find questionable or not. Once you ‘go public’ with your disbelief you are often derided for losing the faith. People on the inside generally think that losing faith means losing a sense of direction or even losing hope.

If you start finding yourself agnostic, atheist  or believing in silly things like the divinity of the Fridge, they are preconditioned to believe you have lost all your values in life. To the believer without an afterlife filled with blessings for being good or horrors for being evil there is no incentive for being a good. It confuses them to no end that you would disagree and claim there is.

I first put together the list below in response to a serious question from my parents, “what do you believe now?” they asked. As I pondered it I felt I not only needed to express what I believed and valued, but also I needed to point out the things I no longer believed. The reason was my loss of faith really had nothing to do with the values I held dear (which are values I still see in the religion of my birth as well as many others.) The reason was more to do with the doctrines and beliefs I felt I had to assert as true(but could not) to continue to call myself Mormon.

There are good things in every religion, but good things don’t equal truth. All Religions start as a rebellion and end as an orthodoxy. In the rebellion stage they offer open doors to differences of opinion and thought.  Once they begin to solidify ‘doctrines’ are formed that you have to believe to consider the religion true in your heart. Problem is as time passes this enshrines current thinking in a way that makes it difficult to challenge down the road when a better way is learned by humanity. It gives authority too much power in how you are supposed to think.  While giving us a community based moral compass and a clear hope to strive for, religion also damns us and prevents us from growing or thinking outside the status quo.

I believe however that there is power in mythology, if you disagree, then the force is not with you young padawan and you wouldn’t get the humor in the preceding reference. There is power in a goal and an ideal to strive for. People that are otherwise selfish and looking our for their own interests will gladly die for something they believe in. That is power. In short the power of religion is the power of its myth. If only we could disconnect it from the abuses it brings when we take it too literally. This is my hope.

So with that, here is what I believe in, call them my personal values:

Here are some things I used to believe but no longer do:

When I read back over that list I feel if I were to ask believers and ex-believers alike to make a list of what they believe and what they do not, that we’d all pretty much agree on the first half of this list of values. Only the second half would vary. LDS people would understand many of the references in my second part and depending on how strictly they believe or not would adjust the list accordingly. An ex-catholic or post-muslim would have his own second list of things that would sound downright weird to anyone else not having experienced their religion.

My point is this, all these religions, all these myths have some common ground. Generally speaking that part is the ‘good stuff’ that makes us feel it is right. The things we have to put on a shelf and try to forget about on the other hand, those are the negatives of that particular ideology. I often say that people are good despite thier religion rather that because of it. These are typically the buffet members, you know the ones that take all the good stuff they like and simply don’t believe the rest. Nope they aren’t the zealous ones, they are the moderates that some of the more fanatical gossip about. Orthodoxy demands compliance and fanaticism though. Wouldn’t it be great if it didn’t? Wouldn’t it be great if there could be a community, a myth to ‘believe’ in but not take so seriously that it becomes an orthodoxy that we use to judge others?  I think so.

“Mythology is not a lie, mythology is poetry, it is metaphorical. It has been well said that mythology is the penultimate truth–penultimate because the ultimate cannot be put into words. It is beyond words. Beyond images, beyond that bounding rim of the Buddhist Wheel of Becoming. Mythology pitches the mind beyond that rim, to what can be known but not told.”  -Joseph Campbell, The Power of Myth