When Was The Last Time? 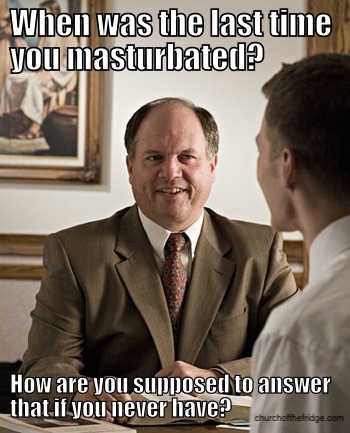 “When was the last time you masturbated?” was the question….

I sat there dumbfounded at 12 years of age, I wasn’t entire sure what the question meant to be honest.

“When was the last time you touched yourself” the bishop asked me. It seemed like a dirty thing the way he said it.

“Ummm I don’t”… I ventured realizing he meant ‘spanking the monkey’ as my friends called it.

Then as he sat, his face inches from mine with our knees almost touching, one hand on my leg he stared into my eyes. It seemed like forever when finally he said “ok.”

I gathered later that he was waiting for the power of discernment to tell him if I was lying or not. I wasn’t. But I’m not that sure he was convinced.

You see I’d just undergone the beginning of my first interview with my bishop at age 12 to assess my worthiness as an individual. I had no idea that this church leader was about to  describe in detail all sorts of words I didn’t know at the time. Bestiality, petting, necking were just a few of the terms I learned in my interviews with this man.

Later in life comparing notes with other kids my age, I kind of figured my bishop was somewhat of a lone wolf with the crazy interrogations he’d impose on us youth of the ward. Not everyone had experienced what I did. Even as I lost my faith I kind of figured I was on the rare side of the spectrum.

Honestly, I wasn’t convinced it was a church wide phenomenon and not just some overly zealous leaders pushing the envelope.

Then I stumbled onto this quote:

Let me suggest the way that I think we ought to interview as ecclesiastical leaders. You, as counselors and psychotherapists, would interview much differently. We have a right to interview this way and everyone has a right to be interviewed in depth to find out what kind of life they are living… Now, I hurry so that I can get to this part and say, “Are you morally clean?” You know in all the interviews I have ever conducted, I have never had anyone say no. I can ask everyone in this room and I know what you would say. Every single person in this room would say, “Yes, I am morally clean.”

Do you see the difference? If a fellow did it a week ago, or had a problem or a young lady did, they say, “Heavenly Father, I’m going to promise that I’ll never do that again.” A week later you see them in the interview, you ask “Do you have a masturbation problem” and they answer no. In their minds they think, “Well, I’ve prayed about it and I won’t do it anymore.” They are answering honestly, but the next night after the interview is over, they know they will not be interviewed for another year. Satan will come tempting and there is a tendency to slip. If we ask them how long has it been, then you find out, and you can find out if it has been a week, or two weeks, or six years. If it has been six years, go on to the next question. If it has been two weeks, then let me suggest how you can help them overcome the problem. Give them a special blessing.

I think ecclesiastical leaders who do not take the opportunity to give special blessings really miss a sweet experience and miss the opportunity to bless the lives of the persons they are interviewing. Also, always promise them by the power of the priesthood that they will have the power to overcome the temptations.

This blared at me like an ambulance siren for a couple of reasons. First the fact it was Elder Featherstone stood out to me because he spoke to me in the ward I lived in. Second  was because of a joke he told. Let me see if I can repeat it:

“A man comes home and says to his wife” relates Witherspoon, his hands cupped closely together. “If you can guess what I’m holding we can make love tonight.” She says, “an elephant”. He says, “hmm…. close enough!”

I remember it stood out to me because it make everyone laugh in the chapel kind of nervously and I was sort of taken aback that a GA might have such a salacious sense of humor. Getting older I still figured I was sort of overreacting to the guy telling a joke that seemed a little off color.

That sense of the world being off though returned full force who I read the quote above. I think that’s because I realized that I wasn’t the odd man out when it came to deeply probing, inappropriate interviews. That my experience was codified as the ‘way it should be done’ by the leaders of the faith.

My first interview as a deacon definitely disturbed me. The only other time I have mentioned it was when I stumbled onto the recording of another ecclesiastical leader going too far over the line. But that’s the problem that hit even more deeply home this time. It wasn’t ‘over the line’ like I had thought up till now. It was very much inline with the way leaders had been taught to interview the youth.

So I figured I couldn’t let this slide, there is a swelling movement to stop this inappropriate treatment of kids. I believe this a call to action that needs to be heard. So I’m adding my voice to it as well. It’s not a topic I like to discuss, it brings back memories that feel wrong. But I would be remiss to sit quietly by when real action could be taken to prevent other youth from these prying interviews that I now realize just aren’t ok.

Simply put, if you wouldn’t feel good about a kids teacher having such an explicit conversation with your kiddo at school right? Why should you be ok with it just because it was the bishop asking the questions?