Written In Stone, Why Many Will Still Believe

So the chocolate rock that started the faith I once believed in wholeheartedly finally made the news. Most post-Mormons already knew about it, and even a few devout members did too.

The LDS church, in this Google-enforced wave of openness to get ahead of the average member learning this information for the first time, has released actual pictures of the stone that was used to ‘translate’ most of their founding tome of scripture.

Here is a nice meme’d up picture in case you haven’t seen it yet. 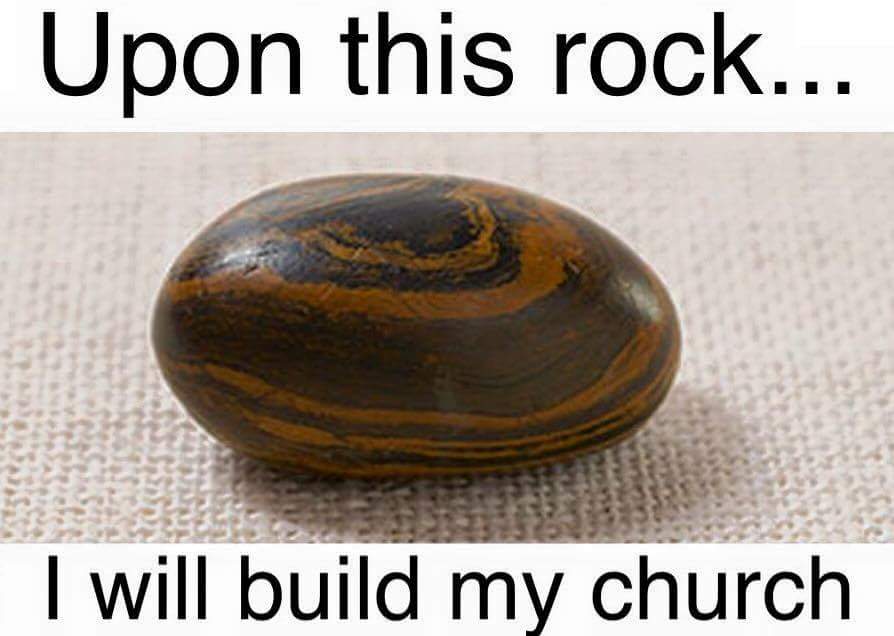 To most of the world the Mormon faith now looks even more silly. They believe in magic rocks after all. But I expect you will also see reactions from your friends and relatives that might just flabbergast you. They will say things like, “This only increases my faith!” Or they might try to compare the stone to an iPad. (For the record, my iPhone has been named ‘Profet’s seer stone‘ since iOS 3.) When critics point out how ridiculous this belief is, the believer will simply declare that their criticism only proves Joe’s prophetic abilities. After all, he said we’d all get a white stone on which any piece of information could be seen. It’s right there in D&C 130:

10 Then the white stone mentioned in Revelation 2:17, will become a Urim and Thummim to each individual who receives one, whereby things pertaining to a higher order of kingdoms will be made known;

11 And a white stone is given to each of those who come into the celestial kingdom, whereon is a new name written, which no man knoweth save he that receiveth it. The new name is the key word.

Hmmmm… now I wonder if I should have changed my password to Ether….. I never did like the new name I got assigned at the temple. If I’d known it was assigned from a simple rotating list based on the day of the month when I went through, I’d surely have picked a day when something more manly from the Book of Mormon was assigned, like Jared or Mahonri. Yeah I know he is only mentioned in the BOM as Jared’s brother, but I did think it was a cool name! Heck, If the temple really is a place of prophecy you’d think I’d gotten the name Korihor instead, that would have been far more prescient. Knowing how the new-name-magic is done totally steals Oz’s thunder. Can’t have anyone peaking behind the curtain! 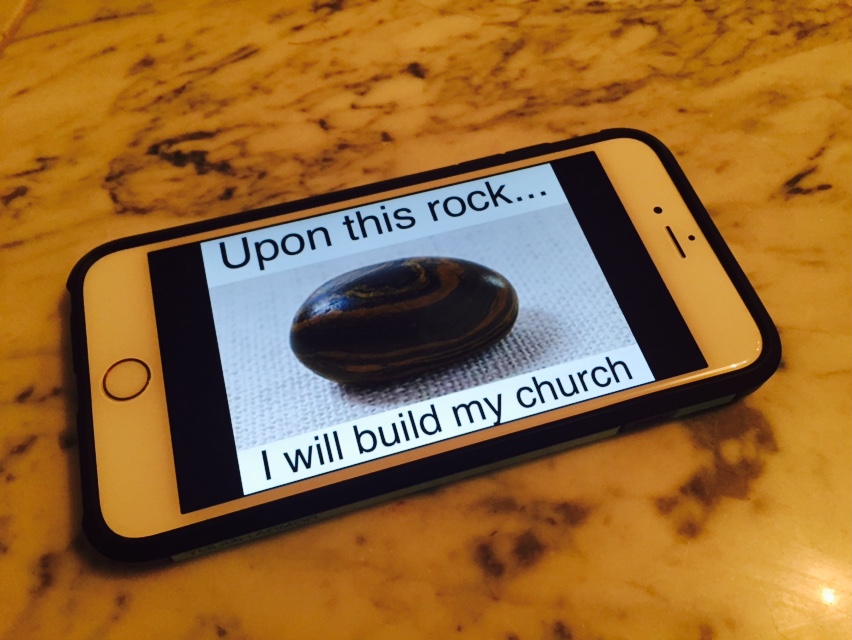 Just for fun, a seer stone on a seer stone laying on… you guessed it! Marble stone! All truth will surely be revealed in each our our personal urim and thummims! You can even look up what a urim and thummim is so long as you ask Google with a pure heart and contrite spirit.

Personally I think all this hogwash about earth getting all bright and seerstone-like and the celestial beings living on them is what sent Brigham Young down the path of people living on the sun.

“If [the sun] was made to give light to those who dwell upon it, and to other planets; and so will this earth when it is celestialized. Every planet in the first rude, organic state receives not the glory of God upon it, but is opaque; but when celstialized, every planet that God brings into existence is a body of light, but not till then.”

Man I used to love this stuff, seriously, reading these quotes again in a whole new light is a mind-boggling experience because in my former years the idea of people being so advanced that they lived on the sun was pretty cool to me. I was definitely a sci-fi religious nerd.

I still love sci-fi, but I have gotten a lot more science than fiction in my diet these days because this sun-people concept now looks… well kinda silly to me today.

Which brings me to my point. There will be a few people that will leave the church over this latest release of information, but the majority will simply still believe. They will say hey God just gave Joseph and iStone! It makes totally sense!. The reason for this is called cognitive dissonance. For a lesson on this I am going to refer you to FAIR. Here is what I pulled from their site on the topic:

Consider the payment of tithing to the Church as a case study. If a Church member doesn’t pay tithing but believes he should be paying it, he’s in a state of cognitive dissonance. His beliefs are in conflict with his actions. It’s painful to him. In order to restore inner equilibrium, he can reduce the dissonance, acquire new information, or minimize the importance of the dissonance to a point where it doesn’t bother him anymore. The conflicted non-tithe payer can choose from four different strategies:

Fair does a pretty good job of explaining the effects of cognitive dissonance and exactly how it would apply in a case where a person’s actions belay their beliefs. Cog Dis, is a theory in psychology first postulated by a guy name Flessinger. He basically discovered the fact that we are rationalization machines. We do something, then we justify why we do it. Very much along the lines of what FAIR described in there example. This from a believers point of view is often why they say the apostate stopped believing in the church because it was ‘too hard’ for them to commit to the church they justified their disbelief in hind sight when the liked boating on Sundays too much. FAIR describes it like this in their criticism of the critics bringing up cognitive dissonance.

This is where the irony of cognitive dissonance as a complaint against believers emerges. Of the four possibilities listed above, only one applies to people who persist in their belief in the Church. The other three can lead to a full or partial departure from Church life. Most of the strategies for managing cognitive dissonance don’t lead people to stay in the Church. On the contrary, they lead people out of it. The same kind of analysis could be made with other challenging aspects of Church life such as home teaching, sexual behavior, honesty, Sabbath observance, etc.

They point out that only one of the options are productive, while the other three options pretty much just keep you stuck in the mode of thinking where you endeavor to rationalize the behavior rather than deal with the dissonance outright. Guess what. I agree with FAIR: only one course is going to get you out of the circular logic. Let’s look at this from another perspective:

Fridge says:
Cognitive dissonance case study.
A person finds out that the Church has been hiding information and not telling the full truth about the seer stones in its past. This person, who believes in honesty, integrity and full disclosure, on discovering the Church hasn’t been forthright, and that their actions of believing and going to church supporting that institution, are no longer in agreement with their own morals and beliefs. They could deal with that in one of 4 ways

Fridge says:
And now the irony of the irony:

FAIR leads you to believe that Cognitive Dissonance is a real thing (which it is). But then for some reason says this:

Wait a minute. Is it real and relevant or is it totally irrelevant… Because I think we are seeing some standard apologetic bullshit here. You know where the stage is set so that there is no way to negate the outcome. Come on FAIR, the nil score argument means nothing to you! Let’s start with the idea that a spiritual witness is real and repeatable. So why do only Mormon ones count? There are Muslims who have felt the power of Allah tell them their church is true. Same with Born Again Christians and Jehovah’s Witnesses and Scientologists. The spiritual witness argument can be used to prove any religion true! This is even in the Book Of Freon so you know this is a strong truthiness!

The Beginning 1:7
“Remember this, if your proof can be used to prove anything to be true, it is useless as a proof of anything.”

The irony is I agree with FAIR on this point. It is literally Fridge scripture as you can see. Maybe they might one day catch the single biggest misstep in their discussing of cognitive dissonance as a criticism though. It is simply this: The only real way out of the trap of dissonance is number 1 on their list.

Acquire new information...  Do your own research, Do your Fridge damnedest to follow the evidence where it leads and fight the desire to simply justify your position. Don’t automatically believe everything you have been told or taught. That stupor of thought when you try to understand things like:
Why God made Nephi kill a drunk guy for brass plates they didn’t need anyway because the verses in the Book of Mormon came right from the king James Bible with italics included!?
Why commit bloody murder to assure we would get these plates when a rock in a hat was used to read the words line by line (to assure perfect translation) when the plates weren’t even in the room?
Why were there thousands of errors in the Book when this specific process was used to eliminate errors?
Why can’t we find millions of missing artifacts?
Why can’t we find the stone box the book was buried in?
Why isn’t there a single non-Mormon archeologist who thinks this book is anything but 19th century fiction?
Why is the same exact burning-in-the-bosom feeling you use to prove your church true used by Muslims to prove theirs is too?

That stupor of thought you get when trying to make sense of all this stuff that doesn’t make sense, it isn’t of the devil, it isn’t God warning you from asking questions that would upset your testimony. That feeling is cognitive dissonance. You want to know how I know that? Because I put my iPhone in a hat and Googled it 🙂 You can too.

May you one day feel the light spill over you as you open the Fridge door and partake of the knowledge therein. May you combat the evils of cog dis and seek out new information. May you one day get your own Cubem Fridgem2 as you too prove your worth to the Tall Cool One humming in the corner. That is my hope, forever in cool, may you always be chill my brothers and sisters.

May we all remember the Frozen Ice, Amen.