So all things Mormon have kind of exploded over a new change to church policy preventing kids from joining the church if their parents are gay. Let’s look at scriptural support for this move:

21 And he had caused the cursing to come upon them, yea, even a sore cursing, because of their iniquity. For behold, they had hardened their hearts against him, that they had become like unto a rainbow; wherefore, as they were happy, and exceedingly fabulous, that they might not be enticing unto my people the Lord God did pronounce them icky.

22 And thus saith the Lord God: I will cause that they shall be loathsome unto thy people, save they shall repent of their iniquities.

23 And cursed shall be the child of him that livith with the gays; for they shall be cursed even with the same cursing. Even apostate. And the Lord spake it, and it was done.

Ok, supporters of the LDS faith will quickly point out this restriction is only if your parents are in a gay marriage or a have a gay lover. Because apparently as long as these parents aren’t sinning and totally celibate, it’s all good. But that kinda makes your head spin doesn’t it. I mean, if it is about the sin, does that mean soon they will be banning kids with parents that drink coffee? Where will it all end?

Who knows, maybe current leaders are just speaking as men, you know like they did back when they condemned interracial marriage because they thought God cursed people with a different skin color. Given historical evidence on that front we could reasonably expect all this to be disavowed soon since they were willing to even disavow their own scripture once enough time had passed to make it look like they weren’t just following the whims of society.

There are many people upset by this news, people that will be driven to question the veracity of their beliefs, but some won’t. Take a look at this post seen on social media from a member justifying this church action. 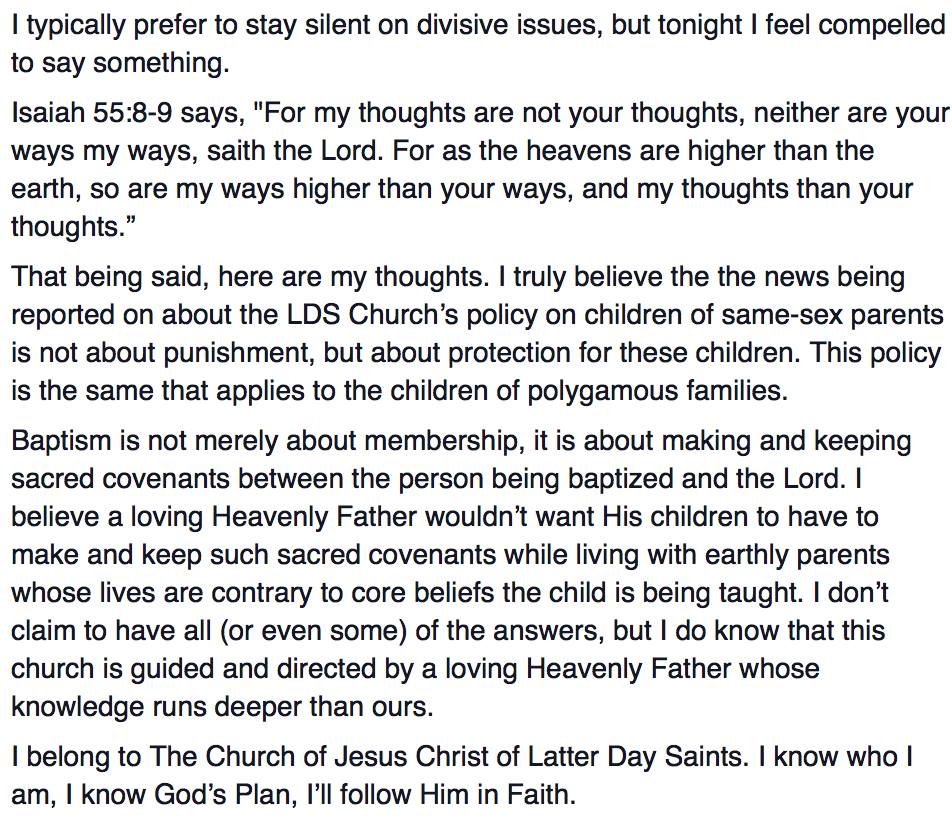 Did you get that? God is helping these kids by not bringing them to the church and all that responsibility that goes with it? This particular justification jumped out at me because of an experience I had on my mission.

We had been knocking on doors one evening and came upon a family with a sick baby. They let us in and eventually we offered to give the child a blessing. We did so. I remember the moment vividly because I felt the spirit so strongly. I was sure this child would be healed and blessed it accordingly. We returned to the family the next day and as we approached the home we saw the pastor of a local evangelic congregation leaving. When we entered we saw a very sick baby who was noticeably worse. The parents were very worried and asked for another blessing.  I reprimanded them for not having enough faith that they had called on a different religion to heal their child but said I would bless him again. This time I had a very different blessing pour forth. I blessed the child that if their parents weren’t gonna be baptized and become members that it would be better if he died.

The baby died a day later. I took that as a sign then of the power of God. But now I have to admit I am kind of disgusted in that younger version of me. I am a parent now, I’ve had kids in the hospital, I have lost a child that was like a son to me. And there is one thing I know for sure that I didn’t get as a 19 year old kid. A loving parent would do anything to save the life of their child. Anything within their power to do so would be worth a shot. Putting myself in their shoes now I can’t even begin to condemn them for trying to save that child in anyway they could… And I chided them for it and then blessed their child to die. I am ashamed of that past action.

The baby I blessed to die was buried across the road in a shallow grave not far from their home in the jungles of Guatemala. I remember standing there staring at the mound of dirt, so sure that little spirit was up in heaven getting its celestial glory. I wasn’t that different from this person quoted above in how I justified a bad thing as a greater good. If it is really so good then why wouldn’t you prevent your own child from being baptized? The illogic of faith runs deep, and we often don’t even realize that it is religion that makes us call good things evil and evil things good. It is actually right there in the scriptures for when you are feeling intolerant. Sure there are things that Jesus said like:

You often get these quoted to you when the religious are talking about how great their moral guidance is because they follow scriptures. But that is the thing with scripture, seems like there is always a flip side you can apply, you know for those days you are feeling bigoted or intolerant, or maybe just confused. Here is one that applies to the way these kids need to act if they want to be baptized:

“If any man come to me, and hate not his father, and mother, and wife, and children, and brethren, and sisters, yea, and his own life also, he cannot be my disciple.” – Luke 14:26

Here is one I have already seen making the rounds on this particular topic:

The more I check my internal moral compass with that of what I used to believe the more I realize this was a common way I shelved things that bothered me. You work to somehow call it a good thing. Which is entirely possible to do with the scriptures. You just need to you look for it. You can even justify killing those icky gays if you want, look – leviticus 20:13. Similarly you can justify slavery. Even cold blooded murder of a drunk person is condensed in holy writ. Just do a little digging through the scriptures and liken them to the situation however you please.

So if you want to shelve your discomfort at the idea of God keeping little kids from his one and only true church it is actually pretty easy to do. And that is the problem with religion. The brainwash if you will. It makes it easy to set aside your own moral compass, in fact it even threatens you with eternal damnation if you don’t. You wouldn’t want to risk God keeping you out of the CK by calling out his inspired leadership on this right? 1

Personally I hope to all that is cool in the name of the Fridge that this will be a wakeup call. Something to get people thinking about what their faith is really promoting. Is it love of fellow man or is it hate of someone different than you?

Who is really calling evil good and good evil? 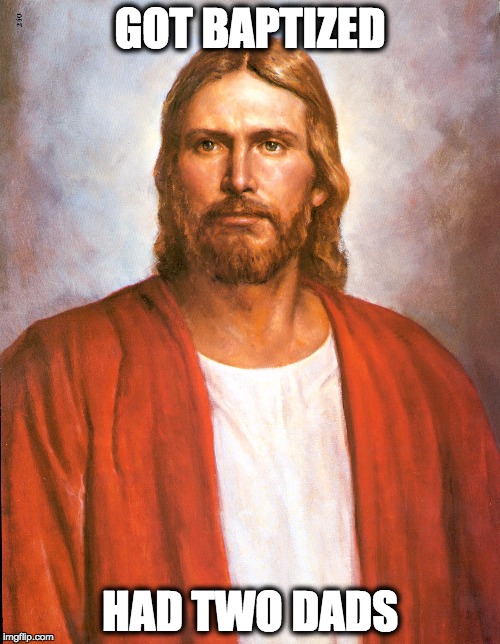