I get a lot of people who just don’t understand how a gay person could be Mormon. When I talk about the discrimination that members of the LGBT community face within the church, many are simply baffled. Why stay in a church that so obviously hates you? Why put up with the crap? So, here’s how this works: 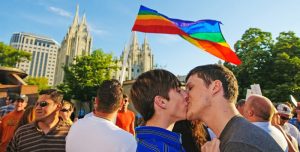 While there are plenty of people who convert to Mormonism and join the church in their adult years, the vast majority of the membership numbers are coming from those “born in the covenant”. That means your parents are Mormons and you get the wonderful blessing of being born into a family already sealed in the temple. It means you get to grow up with Primary. Yes, Primary. A lovely little class where you sing songs like “I Am a Child of God”, “Follow the Prophet”, and “I Hope They Call Me On a Mission”. You get to practice giving talks and prayers, memorize the Articles of Faith, and learn all about how lucky you are to get to grow up with “The Truth” that nobody else has.

As you grow up with this Primary, you’re given a CTR Ring to remind you to always “choose the right”. You’re taught about how the world is in a fallen state and how as a member of the “One True Church”, you’ll be expected to be “in the world, but not of the world” and be a “light” to everyone around you. A wall is put in place early, as you are taught to distrust everything that doesn’t come from church sources. Only the prophets have the truth. Only by following the prophets will you be able to be happy. Only by staying on the “straight and narrow path” will you get into heaven and be able to be with your family for all eternity.

See, family is a very central theme to the Mormon faith. To Mormons, God is quite literally their Father in Heaven. We were all there with Him, His children, before coming to this earth. We even chose our earthly families, as spirits, before we were born. We were sent to earth to get a body and to complete a special earthly mission designed just for us, and our family was designed “perfectly” with a father, a mother, brothers, and sisters to help us along the way. This family is joined together through a sealing ceremony performed in the temples and it is only by remaining worthy of a temple recommend that the family remains together after death. 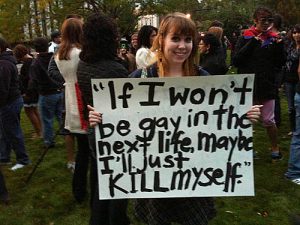 According to the Mormon faith, we were created MALE and FEMALE as spirits before receiving our bodies, and our gender is divinely connected to our earthly mission. The roles we were meant to play were determined by our gender, and the sacred bond of marriage between a MAN and a WOMAN is the key to the highest degree of glory in God’s heavenly kingdom.

These concepts are taught very early. In Primary. Through songs, games, interactive roleplay activities, and through active participation in teaching peers these basic roles and concepts. At eight years old, children are “blessed” with the opportunity to “choose” baptism and commit themselves to the church. This is considered the “age of accountability”, where you are now entirely responsible for all your actions and all your “sins” starts counting against you.

Gender roles are further enforced once you turn twelve and separate into the Young Men and Young Women classes. The Young Men bear the Holy Priesthood, participate in the blessing and administering of the sacrament, get God’s power to bless and heal, attend Scout meetings, and are prepared for their roles as leaders and heads of households within the church. The Young Women are endowed with the blessing of… motherhood, and they are prepared to be housemakers, homemakers, and helpmeets to their future husbands.

And ALL the youth receive very explicit instructions concerning sexual activity. Chastity until marriage is the rule, and anything that causes even a hint of arousal is forbidden. Young men (AND women) who struggle with masturbation are counseled to meet with their bishops and discuss their sexual sins and seek help in bridling their passions and repenting of their sins. All youth activities in which young men and young women mingle are heavily supervised and regulated to prevent “temptations”. Despite the hard stamp of disapproval on tom-foolery, the youth are still known to transgress, as who can really expect perfection?

The young women bear the brunt of the responsibility for any youthful indiscretions. They are expected to maintain modesty so as to prevent their bodies from enticing the young men. They are taught that the loss of their virginity is comparable to becoming like a licked cupcake or a chewed piece of gum. Rape victims are expected to repent and forgive their rapists. And if a couple engages in sexual activity out of wedlock? The woman becomes pregnant? Abortion is off the table. Adoption? Maybe. But the standard advice is to hurry up and wed so that the baby can have a “healthy family” to grow up in and so that the couple can avoid continued sinful behavior.

And homosexuality? The Mormon church won’t even use the term. Instead, they prefer “same-sex attraction”.

They list it among the sexual temptations that “some” are challenged with, but God designed every individual’s temptations specifically for them. Such are hardships meant to aid in spiritual growth and learning, and the rejection of these temptations is what keeps an individual on course for eternal happiness. If you feel same-sex attraction, it is what God knew you needed for your own personal growth and He endowed you with the skills and attributes you would need to be able to overcome it.

A young child, growing up in this church, who finds themselves feeling attracted to members of the same sex will quickly bury and repress those feelings. Confessing it to peers would be a cultural death sentence. Confessing it to family often leads to getting disowned and tossed out onto the streets. Confessing it to a bishop leads to regular intrusive meetings where your sexual desires and preferences are discussed and attempted to be “cured”. Many will never tell anyone. They won’t even admit it to themselves. Instead they bury it. Deep, deep inside.

Now if you live outside Utah, you interact more with peers and individuals outside the church, maybe you have a more laid-back family and regular church attendance isn’t all that important, you likely aren’t getting the full blow of brainwashing and indoctrination. You aren’t feeling the brunt of the peer pressure and isolation. Maybe, rejecting the church teachings for personal happiness isn’t too difficult. Or perhaps you’re just naturally a rebellious sort. You’re somewhat immune to parental, peer, and community pressures to conform and fit in. You see through the bullshit easily and have little trouble letting it all go, leaving a ruckus in your wake.

For those who find themselves deeply entrenched, though, it’s a very different story. When you grow up in the Mormon church, being Mormon is a huge part of your personal identity. So when your personal identity also includes being gay… you are faced with a major internal conflict as these two pieces of your self war with one another. Many attempt to find consolidation, accepting that they are gay while still maintaining their faith in the Mormon church. These get hit the hardest, as they must constantly struggle with cognitive dissonance and their gay identity is attacked at every angle. If they opt to marry a member of the same sex, they get excommunicated and any children they have are barred from baptism. Other options are a heterosexual marriage, celibacy, or compartmentalization – having a secret gay life apart from their Mormon life.

So how can someone be Mormon AND gay? Because they were raised Mormon. Just picture, if you will, going through this Primary, going through this youth program, being surrounded by your Mormon peers who are competing amongst one another to be the most faithful, being surrounded by Mormon family. And if you live in Utah, add in Mormon controlled media outlets and businesses, Mormon newspapers, Mormon television channels… Church is your life – there are church activities every DAY. If you’re in Salt Lake, you have a massive temple in your backyard to remind you of the expectations. And in the layer of isolation and distrust for any information coming from non-Mormon sources… Now you have a cult. And that can be very… very hard to escape.