Jesus Was a Rebel

The bible is an interesting document. It is full of contradictions, nearly 500 of them. In church you never talk about them all that much except for the once in a while when a teacher goes off the bland correlated path and enters interesting territory that isn’t the basic you are evil and need to repent stuff. Maybe this is why people laugh at the dumbest jokes in church. It does get pretty boring hearing over and over how evil you are and how you’re in dire need of repentance. A little humor or some lesser known historical facts go a long way in spicing up the incessant repetition that is part of the religion I was born into. I think that is one reason I was loved as a sunday school teacher. Being willing to dig a little deeper to encourage personal thought and investment of your own intelligence rather than doing things just because you were told to was a common theme of my lessons. People that knew me then probably shake their head now and say it was only a matter of time…It makes sense to them that I would rebel and leave. You know, because I thought too much. Funny because years ago I got no end of praise as to how interesting, thoughtful and inspiring my lessons were at the time. Ah those were the days, but back to the topic.

The Bible, it is loaded with contradictions. From my current apostate perspective I think this might be key to its appeal to so many people. Think about it, if there is a pet doctrine that you want to justify, search out the bible you will find it in there. Need a reason to hate mom and dad? Yep that is in the bible. Need a reason to be kind to others, got you covered. need a reason to justify murder, you can find it in right there in black and white.  This is not only the case with the Bible, it is such with the Quran and the Book of Mormon too. In fact all the greatest religious books are somewhat bi-polar when it comes to right and wrong.

This is really super useful for the religious. It makes it so they can always find a passage to support their position, and since being religious requires the ability to block out any bit of information that runs counter to your personal bias it seems like the passage is just what you needed. Case in point:

As the world of Mormonism was recently rocked this last couple of weeks by some pending excommunications from the club. Pro Mormon bloggers took up the torch in support of booting them out.

One is this guy. He states in his opening line that:

“Too many people are neglecting what is in the scriptures and trying to“customize Christ”. You can’t do that…seriously.”

And then he goes on to customize Christ to his own Mormon brand of Christianity. Seriously? Doesn’t he realize there are hundreds of churches that read the same bible he does and they walk away with entirely different takes, even on the very same passages he quotes in support of his position?

I read this blog where they author says “Kate was not in a position to receive revelation for the whole church” as one of the reasons the excommunication was justified. Well duh! She can never be in that position as a woman! Kind of the point isn’t it? Come on ladies think about it when you justify the patriarchy ruling over you! 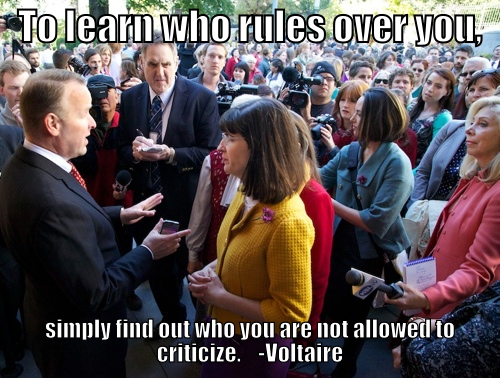 Over and over again I read blogs from believers saying that people must submit to the men that are called of God and just trust their version of what God says to do. This is no big surprise because that is what they are taught to do 1 by the religion. The same guys they tell us are human and make mistakes. Because you know they were wrong about that whole black priesthood thing.

These guys are fallible seems to be the message, but not right now. Not on this thing. 2 How in the world do you know they are right now when they were so very wrong back then? Are you so sure that you think booting out a person for only asking them to think about it is the right thing to do?

Then I saw this commentary that used Jesus to declare that intolerance was a really good thing. After comparing the son of god to a purple dinosaur he said something about Jesus that I totally agree with.

“He condemned. He denounced. He caused trouble. He disrupted the established order.”

You see you can use the bible to preach love, but you can also use it to condemn. Ironically you can pick and choose from the verses in such a way you can customize the scriptures into your own personal doctrine. I don’t think this would be possible without all the convoluted contradictions in there. Is it likely that the reason scriptures make an emotional impact on the reader is because they are so convoluted that you can match them up to just about any personal doctrine you fancy? I think so. In that vein let me customize christ to make a point.

Jesus was a rebel, he spoke out against the status quo, he disrupted the established order. He even made a woman an apostle. 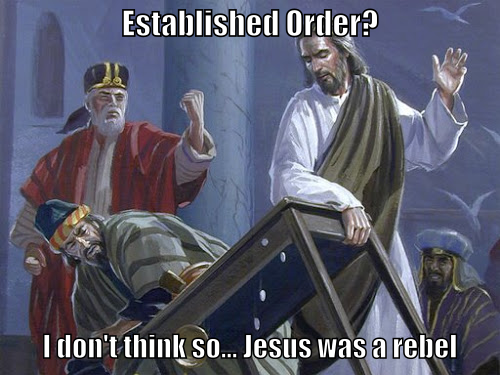 At the time he lived very few people followed him. The established order went so far as to kill him for his rebelliousness. But a few people listened, and in time the world changed.

When I see Kate Kelly condemned for her actions by the established order, when I see a small but dedicated group support her in her efforts, I see history repeating itself. We love rebels that stand up to the rulers that tell us how to think and boldly declare they are mistaken. But usually not in mass, at least not until after the revolution happens. This is why rebels often become martyrs to their cause.3

The masses of the established order ALWAYS vilify the rebel at the beginning. This is why my FB feed is over run with comments of believers pointing out all the reasons that Kate deserves what she gets. Think about it. Would Jesus have been up on that cross unless the masses of jews though he deserved what he got? Now maybe Kate won’t make quite the impact Jesus did some 2000 years later, but we can only know for sure if we wait 2000 years.

You might see a heretic, I see a Martin Luther. You see an apostate, I see a rebel. Who is right? Well the full story hasn’t played out yet so we don’t know. My money is on history repeating itself. Jesus was a rebel. So is Kate. This means the status quo they upset by being heretics will eventually change.

Just you wait and see.