Every now and again a piece of information I pick up connects with another bit of info in my brain and I have an epiphany. Honestly I have no idea if it is a real insight or just a bit of personal confirmation bias, but it does inspire me to write and even draw conclusions that may be correct or mean nothing at all. Either way I figure it might or might not help those that ponder the mysteries of the Fridge and at least occasionally enjoy the bacon kept fresh by the power of freon. Fortunately for me the goal of this church isn’t new converts or even to prove a particular vision is the right thing for humanity. The only goal if there is one other than the commandment to BE NICE is to cause you to ponder, maybe to reconsider how you have looked at things up till now. Shine a new light on an old idea, cast a different shadow, and think about your own process of thinking. In an effort to do just that, this Sunday’s sermon is about boobs.

Yep you heard me right, I want you to think about boobs. What do they represent? I think boobs preoccupy quite a bit of our lives, both for males and females. But why is that? An eighteen year old looks at a nice pair and thinks ‘wow, she’s hot!’ A one year old sees the same thing and thinks, ‘lunch!’ Of course media gives us all sorts of perfect visions and teaches us that size does apparently matter. Any mom will tell you by child number five that those poor things have taken a real beating as they were sacrificed to nourish their kids. It’s no wonder that breasts are both a symbol of sexuality and motherhood.

Enter this bit of info to cross my newsfeed. http://www.totalbeauty.com/content/blog/mormon-plastic-surgery It is an article dedicated a statistic that I hadn’t heard before. Mormon women get a lot of boob jobs. The thesis of the post is that it is a doctrine of perfection that is taught to young women in the church leads them to an outward effort to be pretty. I don’t think it is that simple. (in case you are wondering, this is where the epiphany occurred) I pondered this a bit in light of other thoughts I have had on women and the church, such as the concept that church makes you fat, and the idea the this religion steals female self confidence and ransoms it back for unquestioning obedience. Thoughts about the Ordain Women movement congealed with teachings of magnifying your priesthood and the idea that motherhood equals priesthood. See if you can follow along and share my insight.

Women are taught in the church that there are important male and female roles to play. This is where the your-a-mom-and-can-make-babies that equals the power-of-god-to-make-and-command-universes comes from. Consider what one of the 12 apostles of the church, M Russell Ballard has to say about it, quoted in this article from last April:

“Men and women, though spiritually equal, are entrusted with different but equally significant roles. … Men are given stewardship over the sacred ordinances of the priesthood. To women, God gives stewardship over bestowing and nurturing mortal life, including providing physical bodies for God’s spirit children and guiding those children toward a knowledge of gospel truths.1

Clearly the most important stewardship that a female carries in the church is that of mother. It is literally her God given calling in life. This is such an awesome thing that even in the temple God needs these girls to reign it in as this member pontificates is the whole point of women hearkening to men in the temple instead of God. I hadn’t really thought of this whole hearkening thing all that much2 until recently a female friend pointed out that in the Mormon church God has sons and daughters-in-law, because actual daughters would hearken directly to him. But I digress.

Does it really matter that the church spends so much time teaching the girls how important it is to honor the priesthood and not give equal lesson time to the boys about female power? In terms of this sermon, not so much. What does matter is that even the lessons on priesthood reinforce the importance of motherhood as their calling in life to the young women. As Audra declares this idea in this crowd sourced Mormon FAQ saying:

“As a young girl I remember asking my Mom out of simple curiosity why Women didn’t have the Priesthood. She told me an answer I have never forgotten. She immediately asked me why Men don’t have babies?”

Is it any wonder why they would get a boob job now? 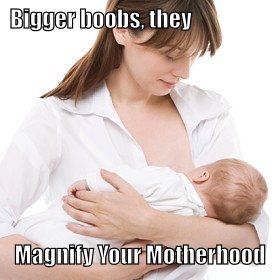