This is the third installment in a series on the polygamist past of the LDS church. What if I told you it isn’t really past at all, but very much a current doctrine condoned by the highest ranking leaders? Would you believe me?

First lets consider eternity vs this life. Which of them is more eternal?

A little math as pointed out by redditor on a thread about the previous post on this topic1 shows exactly what this means.

Yep in the big scheme of things, this lifetime isn’t much at all. That is why we needed the everlasting covenant According to Joe Smith. So we could bind together all these things on earth and not deal with that ’till death do you part’ malarkey all those other churches do in marriage. After all who wouldn’t want to be with their spouse forever? Or in Joe’s case several spouses in this life…

That’s where it gets interesting. You see The LDS church considers a temple sealing to be an eternal marriage. It’s taught to every daughter of Zion to yearn for marriage in the temple. They seek out the prince that will take them to his Mormon castle for that magical moment they have been taught to crave. For only a true and just man will marry them forever instead of just for now. 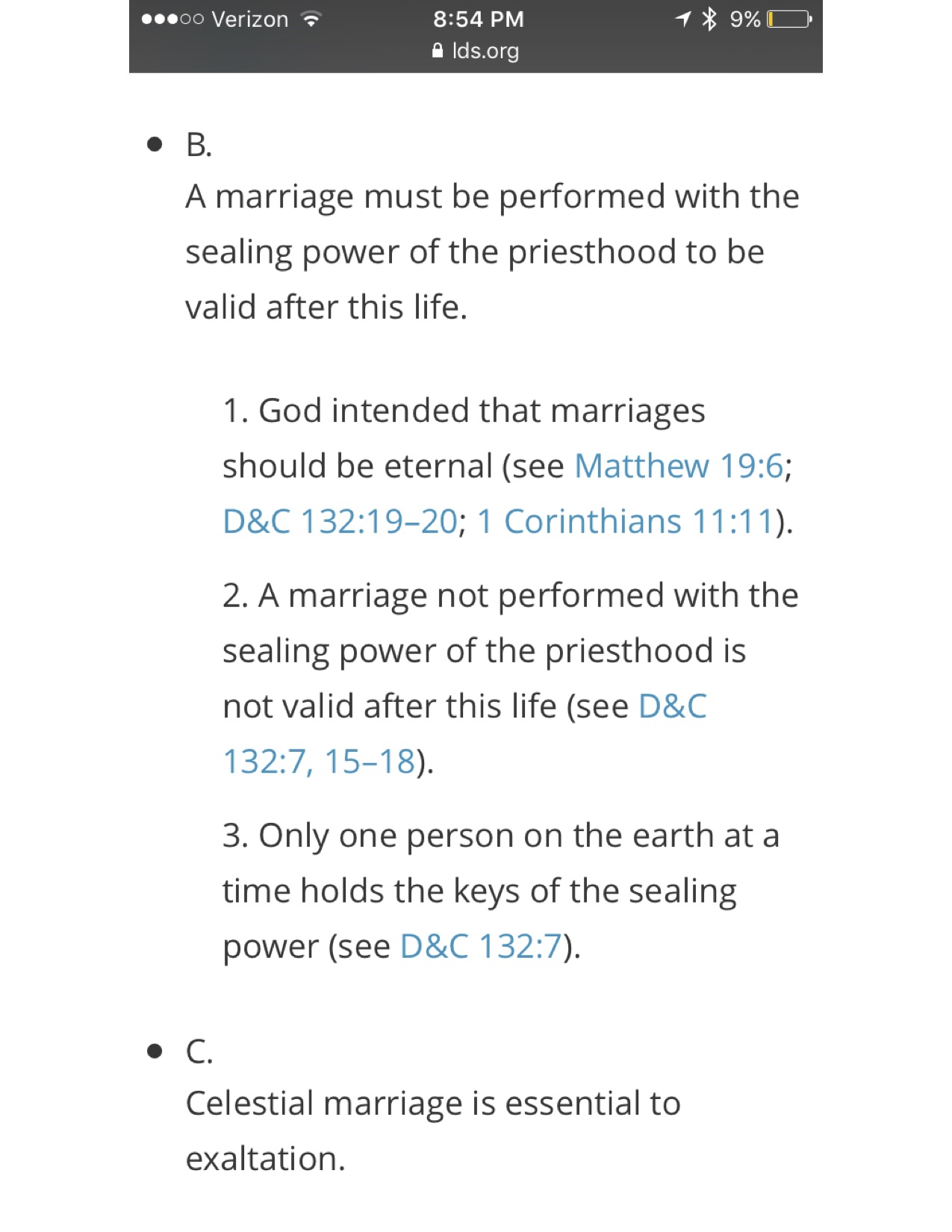 But there is a doctrine that isn’t talked about much yet is followed over and over again by the LDS faith. In the case of death of the first wife the man can be sealed to a second wife. Yes, you heard me right. A man can be sealed for eternity to a second wife after the first is gone. How this can’t be considered eternal polygamy is beyond me. Not given the fact the the church thinks the rules of marriage are so rigidly defined by their God that any non sanctioned form of union requires a person to be kicked off the celestial kingdom path to forever.

Celestial marriage = celestial polygamy. It says as much in D&C132 canonized scripture currently used today in the church.

4 For behold, I reveal unto you a new and an everlasting covenant; and if ye abide not that covenant, then are ye damned; for no one can reject this covenant and be permitted to enter into my glory.

6 And as pertaining to the new and everlasting covenant, it was instituted for the fulness of my glory; and he that receiveth a fulness thereof must and shall abide the law, or he shall be damned, saith the Lord God.

38 David also received many wives and concubines, and also Solomon and Moses my servants, as also many others of my servants, from the beginning of creation until this time; and in nothing did they sin save in those things which they received not of me.

39 David’s wives and concubines were given unto him of me, by the hand of Nathan, my servant, and others of the prophets who had the keys of this power; and in none of these things did he sin against me save in the case of Uriahand his wife; and, therefore he hath fallen from his exaltation, and received his portion; and he shall not inherit them out of the world, for I gave them unto another, saith the Lord.

40 I am the Lord thy God, and I gave unto thee, my servant Joseph, an appointment, and restore all things. Ask what ye will, and it shall be given unto you according to my word.

According LDS conon, the idea of polygamy was part and parcel of the restoration of all things. Now I realize you might have a hard time believing this. If so I suggest you take it to your stake president or local area authority and ask him. 2 I suspect you will get an answer along these lines when the members in Sweden asked church leaders if we believe in polygamy.

But wait, there’s more! If you are finally convinced that the LDS doctrine supports and even likely encourages the idea of eternal polygamy there is something else you should know. The Mormon church (the main one, not the FLDS Warren Jeffs version) believes in polygamy right here, right now, with living women. I realized this when a good friend of mine went through a divorce from her husband. A sealing in a Mormon temple isn’t dissolved just because some legal mortal men said a person got divorced. As is clearly evidenced by the churches actions toward other types of marriage the leaders confidently believe God defines what an eternal union is. Not man.

A temple sealing continues to be in force until the first presidency says otherwise. This is expounded on very clearly in the handbook given to all local leaders of the church. Here is a screen shot to save you some time digging for it: 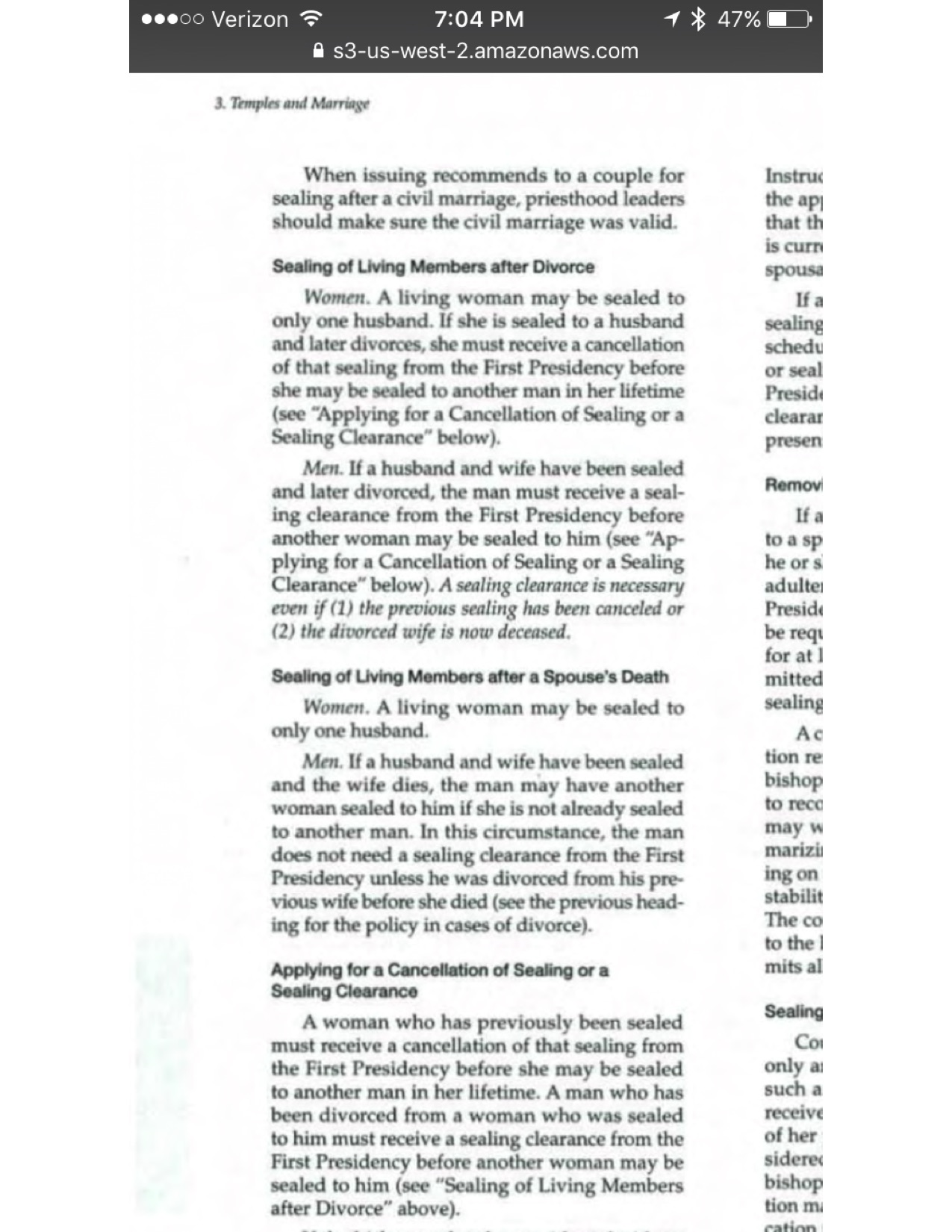 My friend told me one day that she was now an eternal polygamist. The reason is spelled out right there ^^^ in book one. Her previous husband had just been sealed in the temple to his new wife. She wasn’t allowed to dissolve their eternal sealing, while by policy and doctrine it was totally ok for him to be eternally sealed to two women at a time. Even when both of them are still alive.

So does Eternal sealing = Eternal Marriage? That is the question right? And if the answer is yes, then it is pretty clear that the LDS church here and now promotes polygamy of it’s own Celestial variety even as it denies monogamous couples that same right if they happen to have the same genitalia. It is obviously unfair and unjust and more than a little embarrassing as well as hypocritical to most people. Maybe that is the reason when it comes to polygamy the LDS church keeps lying… or maybe should I say careful wording about it. 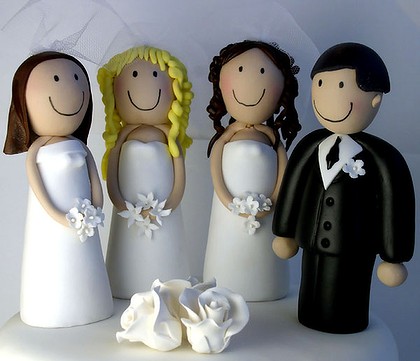