My Visiting Teacher brought a little card and some malted Easter egg candies by and reminded me that Jesus still loves me even though I don’t go to church anymore. I thanked her and gave her a hug and she left. I am not offended that my LDS neighbors still try to get me to go to church or that they believe that their message will one day change my beliefs. It’s not that big a deal anymore and I just thank them and go on with my life, mind my own business, and try to be a good person and good neighbor in spite of my lack of belief in God. I think if Jesus had existed he’d probably consider me a decent example of his best teachings and be ok with who I am. I’d be proud to be considered Christlike but have no desire to be associated with most Christians.

I tossed the card into a round filing cabinet by my chair and stared at the malted eggs. Suddenly the memories washed over me and I was overcome with emotion. Who knew malted eggs could be such a pungent reminder of the true meaning of Easter? So much time has gone by that when I allow myself to recall the experience it almost feels like a scene from a movie I watched rather than something I went through. The memories go into a box and the box gets buried in the back of the closet and I try to not even notice its there. And then something will trigger the memories. This morning it was malted Easter eggs and suddenly I found myself sobbing big huge gasps of sadness. 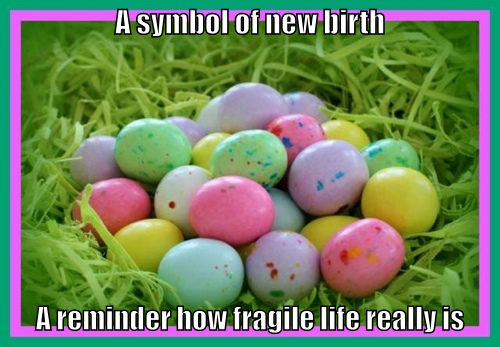 Twenty four years ago on Easter Sunday I killed my daughter. She was already mostly dead but I pulled the plug, so to speak. You don’t really just pull a plug. There are tubes and needles and bandages to remove and blood and iodine and lots of smelly fluids, then some gasping and strange little quaking movements as the air is leaving the body. And then it’s done.

She was born on January 4th with some pretty severe genetic defects and right away I knew something was wrong because her first cry was odd, almost under water sounding. I’d had an emergency C-section and they wouldn’t let me off the operating table to see her or have any interaction the first hour of her difficult life. It made me nearly crazy to not know what was going on but my husband (now ex) was making all the decisions while I was recovering from a very botched anesthesia and C-section surgery.

Her first two weeks were harrowing and she came close to death numerous times. I got to see her when she was a week old but she was already flayed out with tubes and needles and Phenobarbital as they worked to fix the many problems. I almost fainted the first time I saw her like that. I didn’t know how anyone could survive all the intrusions and trauma.

Doug (not his real name)  was the Elders Quorum President at the time and was sure that his calling and election had been made sure because the Patriarch who gave him his Patriarchal Blessing promised him that he was destined to walk on the right hand of God, to be a Bishop and a Stake President and more. He was “in the zone” and believed everything out of his mouth was inspired and that he could just say the word and God would fulfill his wishes.

I was not in much of a condition to make any decisions but I kept asking him to be merciful and if Jasmine needed to be allowed to die that he should stop begging the doctors to keep doing such extreme things to keep her alive. He chided me for having little faith. The Doctors at Cedar Sinai in Beverly Hills, Ca were the best of the best. We had Met Life Insurance at the time and they put no limits on the care we could get for our baby. And what a cash cow we proved to be.

Operations, therapies, drugs, stints, feeding tubes, etc. all were employed to keep her alive. Not viable, but alive. She had swallowed muconium (baby poo) during the C-section and it had damaged her lungs. She had been having seizures while I was pregnant with her but I just thought she was an active fetus. She had lost a ton of blood when she had a seizure while they had her on an ECHMO machine to clean the blood going back into her lungs and dislodged the tube going into an artery in her neck. That only exacerbated the brain damage she may have already had.

She had a small hole in her heart and they performed surgery to correct that. She had a cleft in the soft palette in the roof of her mouth that made it difficult for feeding. She had underdeveloped esophageal muscles and would vomit up most anything put in her stomach and so had to have a feeding tube that bypassed all that. She had severely clubbed feet and who knows what else wrong with her. It was determined that she had Trisome 2, a very rare genetic disorder that only 16 people had ever been linked to. Some were semi retarded and lived into adulthood and some had died in infancy. We had no idea what her future would be like.

After three months of all this trauma and travel 90 miles a day to the hospital to see her they finally let us bring her home the day before Easter. I felt like I was in a getaway car leaving a bank robbery as we drove her home. We had a home health nurse to help us with her heart monitor and other gear but she was stabilizing and seemed to be breathing on her own, holding down formula, and even reacting to us a little when we held her. She would follow me with her eyes and smile, but it was most likely just gas. Still, it was almost normal.

(Stay tuned for the rest of this story)