On Worthiness and Respect

Often when I point out the problems with believing in religion, particularly in the more specific cases like killing because ‘God said so’ or coercing young teens into marriage under penalty of eternal damnation should they refuse. Without fail the believer starts demanding I respect their faith.

I want to examine this. First lets talk about what they really honestly believe. In the LDS faith from which I originally hail.1 They have a doctrine known as the plan of salvation. It pretty much lays out the fundamental beliefs of the Mormons in terms of how things are gonna go down.

Here is a picture: 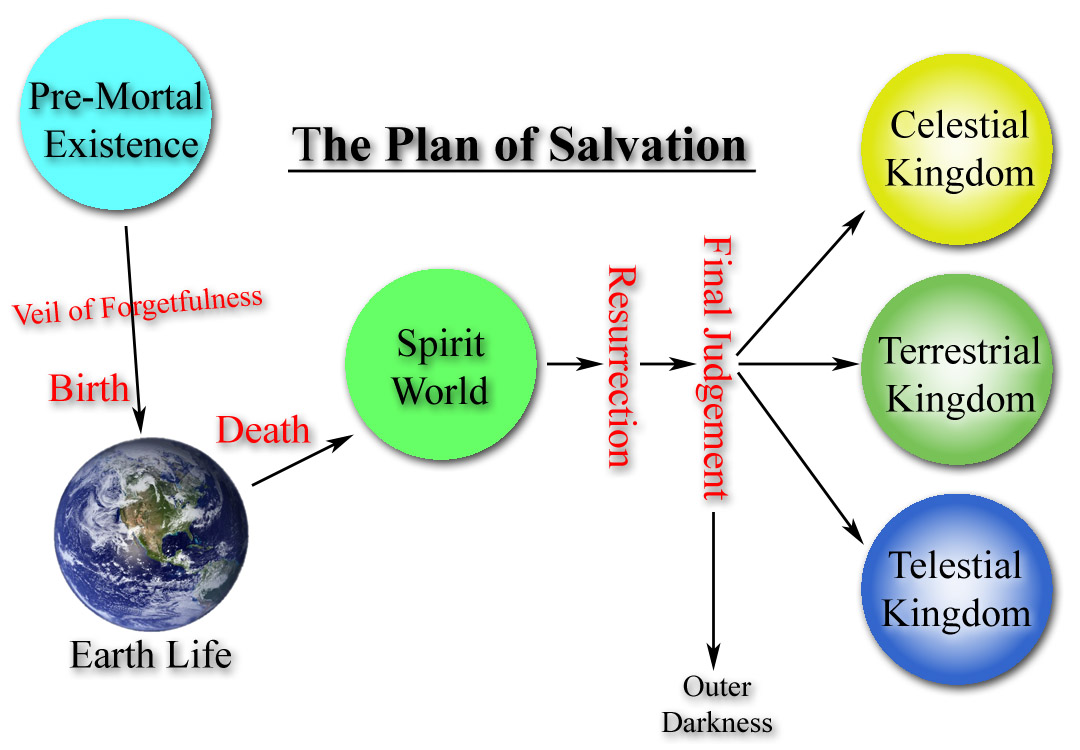 Some of the cool ideas of this plan is that we are fundamentally immortal beings. Which is a comforting thought when faced with the reality of death and difficulties experienced in our lives. In general the Mormon’s don’t have the typical ‘Hell’ of other christian faiths. Let me explain. All those kingdoms on the right side of the pictures are called degrees of glory. The Hell of the bible, where weeping and wailing and gnashing of teeth go on is actually that non-kingdom at the bottom of the diagram called outer darkness. Mormons are generally proud of this ‘inclusiveness’ in the after life for all God’s creations. You see pretty much everyone is guaranteed to make it at least to the Telestial Kingdom, immortality is a free gift to everyone thanks to Jesus.2 Eternal life (living with God in the CK) on the other hand requires you to specifically follow the Mormon teachings and be part of the Mormon church.

To end up in outer darkness, you have to know without a doubt that the LDS church is the one true one. You must have personal undeniable revelation to that fact and then become an apostate and fight against it. Being a person that had some pretty incredible spiritual experiences that I now think were cognitive faults of my own brain, I could possibly fall into that category. That is if I am wrong and the faith I have left is in fact God’s approved one. But if I am not like Satan and the 1/3 of souls sent there and this plan is legit. I am likely headed for the TK or the TrK (Telestial or Terrestrial Kingdom). You see the CK is the top tier. To get there, you have to accept a mortal baptism via correct authority which is only in the LDS church. To be in the top of the top, you need to also be temple married in the LDS faith sealing your family together for all eternity. It is a pretty grand vision of family being forever connected in this life and the next… You get it all, essentially you get to be a God and hang out with Gods. Just so long as you are worthy.

You see to be worthy of going to the temple, you have to believe in the church. You must pay tithing, you have to believe JS was really a prophet, (even when he told 14 year old girls they needed to marry him) You must assert a testimony of belief in the whole restoration story the church presents you to get this ultimate blessing. You must undergo a temple worthiness interview with your church leaders where you clearly assert these things to be even allowed in the the temple and thus the top of the CK. But if just don’t buy the LDS is the one true church story and you think Joseph Smith was a con man but you are still a good person you will get the TrK. If you basically sucked it up here on the earth, killing, committing adultery, drinking coffee and generally sinning without repentance, then the TK is where you go. It should be noted that the TK is generally believed to be like the earth is today minus all the bad stuff. So pretty nice place actually.

Now a really important thing to understand is that if you don’t make it to the CK. You don’t have any family in the next life. In fact if you are not sealed in the temple, then the family relationships you have here do not persist after death. This is the great incentive to be worthy of the best blessings God has to offer. All good Mormons strive for the CK. That is what they mean when they say families are forever. 3

I keep bringing up the word worthy in this post because that is very much the general fundamental belief of an LDS person. You need to be worthy to make it to the CK. This leads a person that embraces this belief system to look at non-mormons or non-believers as not worthy. Now if you might be thinking (as most non-mormons do) ‘that is pretty pretentious!’ Well it is, but it is so engrained in the faith that the believers don’t realize how pretentious it is at all. It’s just the way the world works to them. If fact, even once I could no longer believe it was the one-true-restored-plan-authorized-by-Heavenly-Father. For quite a while I didn’t realize how pretentious and judgmental that belief was.

Now a couple of years later one of my sons was judged not worthy by a bishop who was counseling his girlfriend to break up with him because he would never be worthy to take her to the temple (since he is no longer Mormon). Thinking about that I realized for the first time just how pretentious this belief is. It is so bad I have found that most Mormons themselves won’t admit they believe it when pressed. Thing is, in church, at home with family and people that believe the same this language of worthiness vs unworthiness is used all the time. But try this, ask an LDS person if they think a muslim or atheist is worthy of marrying their daughter and watch them dance around that word. You see they have been taught their whole lives what makes a person worthy. And it starts with being a believer in the LDS faith first and foremost. Instead of an honest answer based on the churches teachings you will get all sorts of talk about common goals and same desires stuff instead of a straight forward answer. As a friend of mine known as the Croc says. The doctrine they believe in is so bad they won’t even admit they believe in it.

So why all this discourse on worthiness? It’s simple, you see I have some family and friends that completely believe that I am not worthy of God’s highest gifts.4 They believe that my boys are not worthy of the love and affection of girlfriends that are LDS. They fundamentally are 100% sure the LDS church is true and that means by extension anyone not Mormon is not worthy in their eyes. So when I am told that I need to be more respectful of their religion and faith, I’m sorry but I just don’t see it that way. You see in their eyes, unless I am Mormon like them I am not worthy of being a member of their family in the eternities. That is what 100% belief in the LDS plan of salvation means wether you like it or not. To say otherwise is dishonest.

So If I am not worthy to be your family or your friend for all eternity, maybe you should think about how you would feel were I to believe the same thing about you… Would you be all fine and dandy with me thinking that? Would you still want to hang out with me with that understanding hanging forever in the background between us? Maybe if you my dear believing friend or family member think about what you really believe, you might begin to understand why getting asked to a baby blessing, or a family baptism or any other church related event that your life revolves around isn’t the spiritual wonderland to us that is to you. Because if you are honest with yourself you really believe we’re not worthy of your presence in the next life. Now tell me again why you think I need to respect that belief?