Sealed as a Slave, the Disrespect of Jane Manning

Mormon news feeds everywhere have been posting their pride of the newest LDS temple located in Payson, Utah. A great and spacious building according to Deseret News in their announcement. Ok they didn’t use exactly the words great and spacious. ‘Massive’ and ‘sweeping’ were the synonyms specifically used in the article. But trust me the irony of the church being so proud of this beautiful building and calling for everyone to come see it is not lost on a student of the Book of Mormon. 1 But I digress. This article isn’t about the elaborate spare no expense efforts of building huge ornate structures that require you pay2 the church just to get in them. It is about one person in particular and the price she paid.

Her name was Jane Elizabeth Manning. Her picture now hangs in the Payson temple. Since the First Presidency approves all art work in the temples, you can be sure they meant for it to be there. The question is why? Is it because she was such a faithful person? Or is there a need the leaders feel to scrub their racist history and say, ‘here see how much we love black people!’

Turns out there is an article on LDS org about this woman and her life. While reading through it, this bit jumped out at me and I suspected there was a ‘rest of the story.’3

“Jane remained part of the Smith household for several months. While there, she enjoyed the association of Joseph and Emma’s family and visited often with the Prophet’s mother, Lucy. Eventually Jane became friends with other members of the household such as Sarah and Maria Lawrence and Eliza and Emily Partridge.”

How did I know? Well having studied a lot about the women around Joe Smith, I knew Jane’s friends had a back story that was being glossed over here. In Emily’s own words:

Yep, the Partridge sisters were polygamous wives of Joe! You know that stuff good members are supposed to avoid speculation about. If you are a believing member reading this, here is another tidbit you should do your best to not think about. The Lawrence sisters were also wives of the prophet. In fact when William Law made all that plural marriage stuff public, there was a lawsuit he initiated at the time using Maria Lawrence as proof that Joe was living in adultery. Polygamy was against the law at the time in the US. And it still is. You see why my bullshit detector was going full tilt when I read these names? I was sure this was more of the careful wording4 that the church admittedly practices when it comes to disclosing church history. Because you know, they can’t be bothered to actually admit they were wrong and simply apologize.5

After some googling I turned up a few articles about Jane. In the first one, I found out that Jane was the Kate Kelly of her time, she just didn’t get a group of people to follow her. (Which is probably the reason she wasn’t excommunicated.) Back then it was far easier to get a personal sit-down with top church leaders than it is today. And don’t forget this woman had been part of Joe and Emma’s household. Emma even proposed adoption to her. You have to wonder at the rate Joe collected wives in his household during this time if other proposals might have occurred and been shut down. But on to her story.

Repeatedly Jane asked for the same blessings of the temple that were granted to the white people of her day and age. And repeatedly she was denied.

Sure these days the church disavows anything to do with skin color being a curse. But that is now. This was then. According to the leaders of her time, Jane was cursed. They continued to deny her request for temple endowments because they were confident that God himself had instituted the conditions that had enslaved these people and made them servants of the white man. The original prophet himself in a letter to Oliver Cowdrey used the scriptures of the bible to explain this concept.

So Jane was denied the same blessings given those of a paler complexion. However after these many requests she was eventually allowed to be sealed to Joseph as a servant in the next life. Think about that and look at how Joe viewed servants in the biblical sense in his own letter. Servants to these men were equivalent to slaves to their masters. Sure they admonished the masters to treat them decently (thank Fridge!) but still they were not considered to have any hope of redemption until after all of the white people got their chance. Deny this all you want but the evidence is clear that at the time Jane was denied priesthood temple blessings, the brethren believed it was God’s doctrine and thus church doctrine7 to deny her petition. Jane wasn’t the only person that got slapped down for questioning this stuff. If you haven’t read the letters of Dr Lowry Nelson make sure you do so. Here is a link to them.

Over and over again in church history this race based denial to black people comes up as doctrine condoned by God himself. It’s what the leaders of that day and age declared to be the word of the Lord as given by the mouth of his servants.

These days the church would like to shove that all down the memory hole to be forgotten. They disavow any of this being real, as if it was some sort of grand 100 year running mistake by old prejudiced dudes preaching the philosophies of men instead of what God wanted. This is a disservice to Jane because she believed the racist doctrine they preached to her and her faith still withstood the test of time! It was her faith that the doctrine would eventually change that kept her in the church. The leaders who preached blind obedience to follow the brethren were the ones that were wrong. At least that is what the church is telling us today… Makes you wonder what will be disavowed tomorrow doesn’t it?

Now Jane gets to be the poster child for the all inclusiveness of the church in its latest grand PR effort of building ostentatious temples. Soon to be found even in Haiti, the poorest country in the world. Why dump millions into these great and spacious buildings? Why hang pictures of servants that were sealed to Joe Smith in them?

One reason and one only. Marketing. And that my friends is nothing but disrespect for a woman that showed so much courage to challenge the status quo.   Jane Elizabeth Manning agitated for change. Just like Kate Kelly. But… Since she was quiet about it; since she didn’t start a movement and gain a following, she was turned into … a commercial! 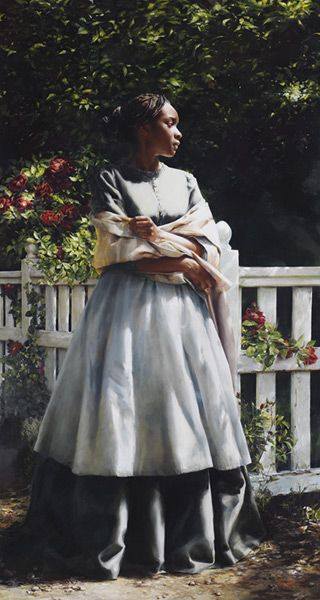