Ted Would Be Offended

The latest LDS meme to flood Facebook feeds in the worlds of Mormon is from the Normons, a group of bloggers on a crusade to point out how normal they are 🙂 I should know, I think I am a pretty normal Mormon too. You heard it right, I’m still a mormon. Technically you would call me an Atheist Mormon.1 You see I haven’t yet resigned my membership. Since I now see it all as simply a kind of club some guys made up 184 years ago it doesn’t really have any hold over me like it used to. I’m not actually afraid of eternal condemnation or missing out on becoming a God at a future date. I just don’t believe in it anymore. My only reason to resign is to get my name off the roles so they can’t claim me as a member in the same way they claim some 60% of the numbers on their rosters even though the are completely inactive and a large majority of them don’t believe it is even a remote possibility that it is the one true church on the face of the earth. My biggest reason not to do so is it will crush my moms hopes that one day I might return to belief. Crushing hope is something I loathe to do, especially when it is my family’s hope. 2

So I claim to be a normal mormon who lacks a belief in God. I have a very good friend that silently disbelieves in God and yet he goes to church every week with his wife and doesn’t let on to a soul other than me of his disbelief. That begs the question. Is atheism really all that normal or do we eat babies and worship evil? Dallin H Oaks recently called atheists out as anti-christs, the Korihors of our day and age.3  I don’t know about you but I was raised to believe that anti-christs were devils children I mean that’s why you shouldn’t listen to AC/DC right?

So am I really an anti-christ simply because I don’t think a guy from 2000 years ago was literally the divine offspring of God in heaven and a newly married teen age girl? If you think that is the case, I would ask you this. 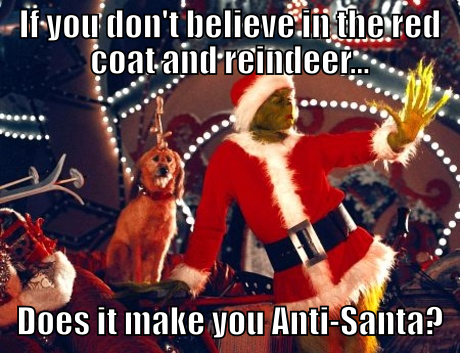 Are you anti-santa if you don’t believe he is literally a rotund reindeer rancher that breeds his steeds to have glowing noses and can magically get to every house on the planet in under 24 hours? I think personally I am very pro santa because of the good that mythology brings to the world. Is it possible that I can find value in many of the christian teachings without agreeing with all of them nor believing he was God incarnate? Better yet, isn’t that exactly what we all do anyways? I mean does anyone really take literally Jesus’ admonition to hate their family, or do you interpret it in a way that isn’t so caustic? My point is we all pick and choose from the smorgasbord of belief. Somethings we believe in literally and somethings we turn into metaphor until it fits our world view.

Which brings us to TED. In an effort to look more normal, this guy metaphor-ed general conference into a spiritual TED talk. Something to not be ‘afraid’ of.  The first thought that came to mind when I read it was I haven’t yet met a person that was scared of LDS general conference. I suppose someone out their might fear narcolepsy, but most of us look forward to a nap as the almost hypnotic cadence of the speakers lull us off into a state of extreme suggestibility.4 The second thought I had was “REALLY?” I mean seriously I am an avid consumer of TED talks and enjoy them immensely. They are anything but pedantic repetition of the same dogma over and over. They are all about questioning the status quo, specifically challenging the ways we currently think about the world. To me conference couldn’t be further away from the sprit of TED talks. Just take a look for yourself and see what I mean.

Oh and one more thing. Normon was right about not being afraid, but it isn’t dogma we shouldn’t be scared of. It’s new ideas.