The Crazy Logic of Belief

Imagine for a moment that you are a backyard scientist and you are running an experiment on gravity. Your hypothesis presumes that a roll of quarters will fall faster than a marble. Your logical reasoning for this happening is because the roll of quarters is heavier by about 10 times than the marble.

You set up the experiment and discover they fall at exactly the same rate. What do you do? Do you realize your hypothesis is false? Or do you come up with a reason for why the data didn’t match your prediction?

If you are a bit of a science history nut, you will recognize this as a popularized experiment where Galileo proved the previous ideas about gravity wrong. It was a big enough deal for the progress of experimentation and scientific method that astronauts even repeated the experiment on the moon.

Now given the hammer and feather example in the video you can see how it might seem like lighter objects fall slower than heavy ones, a result that also happens to make sense and be a little more intuitive. Changing the object shape but not changing the weight produces a very different result as also seen in the video. So what gives?

Well these days it’s all pretty well known, the difference is air. Gravity without any air resistance pulls on all objects with a constant acceleration.1 Since air can get in the way and mess with the results so much. It turns out in your backyard experiment it is quite possible you could totally miss the underlying law of falling objects. Especially the result showing that without air getting in the way a hammer and a feather fall at exactly the same rate.

This happens because it is counter-intuitive. A person having dropped a lot of feathers expects them to fall slower than a hammer. Their experience builds up an expectation that is not representative of the core reality. But sometimes our intuition is wrong.

Intuition is not necessarily a rational process, it’s something that is trained by repeated observation. It’s often very useful because we can quickly jump to a conclusion when needed. That very skill helped our ancestors not get eaten by tigers when they noticed that rustling grass meant there were bad things sneaking up on them. The guy that took time to logically deduce if it really was a tiger typically ended up as lunch though. So we didn’t get as healthy a dose of his genes.

My point isn’t to say intuition is a bad thing. Just that sometimes it can be wrong.2 That’s why sometimes results are counter intuitive.

Say for example you and a friend were debating this falling object phenomena and he insisted that the weight of the object was related to the speed at which if fell. He kept pointing at the feather and the hammer results to confirm his point.

You try to show him a result using a bouncing ball and a cannon ball and he dismisses your example out of hand, even refuses to run his own test because he has already ran the hammer and feather test and ‘knowns’ without a shadow of doubt the feather falls slower.

When you get him to discuss it he comes up with a theory that your balls are shaped such that air pushes down harder on the bouncy ball making it catch up to the cannon ball. He even produces complex equations that explain your result and allow him to keep believing that lighter objects fall slower.

What gives? Is it possible that someone would be so stubborn to not let go of their intuitive understanding and accept a new idea, in this case the law of gravity?

To us it seems silly right? Yet exactly this kind of bizarre reasoning, justifying ones own belief happens all the time when it comes to religious discussions. 3 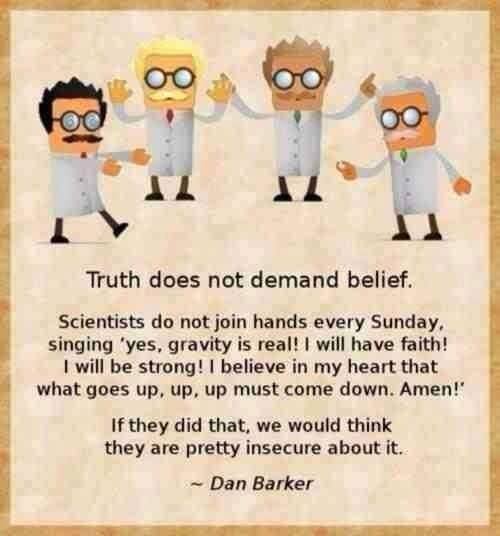 The fundamental logical flaw that occurs when a person takes the apologetic route for justifying their beliefs is simple, they don’t weigh evidence the same. Evidence that supports belief gets all sorts of rationalizations while the same kind of evidence that would negate the validity of their belief is dissmissed out of hand.

This is a human flaw that knows no bounds of intelligence or education, in fact in a lot of cases a smart person is quite capable of coming up with such complex reasoning that you can hardly follow it. The great Randi points out in this clip its precisely because of their education smart people are sometimes the easiest to fool.

All this came to mind as I recently debated the historicity of the Book of Mormon with several LDS apologists. Their best proffered evidence of authenticity was the NHM = Nahom idea. Proving that Nephi’s bountiful is a really place in the old world was the best actual proof for the book.

Ignore the fact that things like smelted steel, swords, elephants, coins, chariots, horses and even DNA, are completely lacking in the new world… Oh, look over there! It’s is a place that shares 3 letters and some grass and trees in the description! That MUST be proof!

I pointed out to these guys the Vern Holley maps that were part of what collapsed my own shelf. They dismissed by my evidence out of hand just like the gravity example above.

The 30+ correlations with names from that area and time meant nothing to them. I had spent a bunch of time digging through old geography maps to make sure they names were there so I knew they existed in the past and I said as much. But the apologists still insisted it was a meaningless correlation.

Why did they mean nothing you ask? (Because I did ask.) We’ll geez you know just because some letters match up with other words it just isn’t proof!

Really? Like NHM = Nahom? I postulated. That lead to them accusing me of  being a horrible anti-mormon. The idea that I would challenge their expertise showed my lack of knowledge and or intellect. Then they ejected me from their group.

Later, following up on some of the references presented by these guys. I found some more of the arguments promoting the idea that Vern Holley correlation is meaningless. Here are a few:

It becomes pretty apparent, pretty fast that we humans are far more likely to confirm our bias than we are to willing to challenge the status quo.

My point in this post to the Fridge door today… I’m not really sure. The more I think about it just doesn’t seem all that effective to try and teach critical thinking post commitment. People need a reason to change their mind about something, an emotional one for the most part.

You just can’t logic someone out of a crazy belief. Trust me, they will just come up with crazier logic that makes complete sense to them. I honestly doubt I seriously affected the apologists position with my reasoning at all.
So maybe this post is for the select few that think its worth looking behind the curtain to see what Oz really is. There has to be a half a dozen or so of you out there right?