The Secret of Happiness: The Search

If you know me, you know that I’m generally a pretty positive guy. Over the last few years though as I have dissected and exposed the inner dilemmas and even the downright dishonesty that religions (not just my own) have imposed on society I have certainly taken on a more critical and skeptical approach to all things that involve beliefs. However I personally believe (ironic isn’t it 🙂 ) that you can’t critique constantly without becoming a cynic. It is a matter of feeding wolves:

An old Cherokee is teaching his grandson about life. “A fight is going on inside me,” he said to the boy.

“It is a terrible fight and it is between two wolves. One is evil – he is anger, envy, sorrow, regret, greed, arrogance, self-pity, guilt, resentment, inferiority, lies, false pride, superiority, and ego.” He continued, “The other is good – he is joy, peace, love, hope, serenity, humility, kindness, benevolence, empathy, generosity, truth, compassion, and faith. The same fight is going on inside you – and inside every other person, too.”

The grandson thought about it for a minute and then asked his grandfather, “Which wolf will win?”

The old Cherokee simply replied, “The one you feed.” 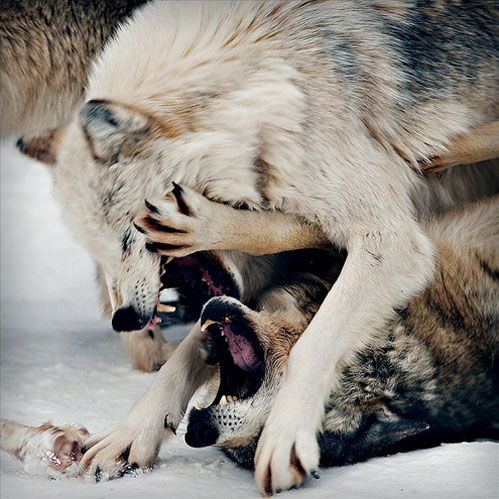 Since I started this blog I have always hoped that it would grow beyond just a critique of religion. Sure there is lot to learn when we critically examine the things we do without contemplation nor with comprehension of why we do them. Such is the nature of the self delusion that lies at the core of so many of the things we are so sure about. But also you can make a pretty good case that myth itself (which is exactly what religion is when it isn’t the source of all truth) has value in terms of teaching lessons that directly correlate to a person’s outlook on life.

So this morning as I drove to work I envisioned a series of posts that could help us find happiness. Man’s search for happiness is certainly a core component of my past faith and seems to be a competent of most of the other faiths that I have personally evaluated. Religions proffer following their guidelines so that you, the parishioner, can be happy. If so called ‘legit’ religions can do it, in essence making up their own recipe for happiness for mankind. Why not a totally fake one?

So join me as we look at what faith tells you to do to be happy. Let’s also look at what science says we need to do to increase our happiness. Let’s search together for the best practices and theories to feed the wolf that makes you happy. So that the next time someone asks you what your atheistic belief in the Fridge has to offer. You can point at how joyous it makes you and at the lessons it teaches you, and then you can ask them. “What do you think? How cool is that?”